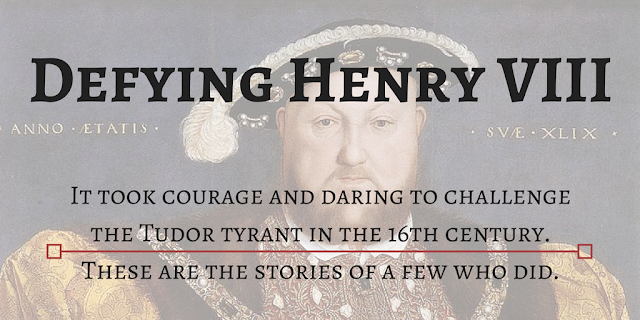 Like many people who defied Henry VIII, Thomas More had reason to believe that he may be able to speak his mind while retaining the relationship that he had built with the king over the years. Also like many others, he was fatally incorrect.

More became one of the thousands of religious martyrs of the sixteenth century or, perhaps more accurately, one of the large number sacrificed on the altar of the Church of Henry. King Henry had counted Thomas More as a close friend and confidant for years. A scholar and humanist with friends like Erasmus, More was welcome at court where the king appreciated great thinkers and theological conversation. More and the king both wrote at length against the reformer Martin Luther. Yet when Henry decided to make his own protest against the Catholic Church, he expected More to give him his support.

More did not. And Henry should not have been surprised, for he knew More's past and understood his passion for the church better than most. Even as a young lawyer with a bright future ahead of him, More had considered becoming a monk and had lived as much like one as possible while practicing law at Lincoln's Inn. A desire for marriage and statesmanship kept the devout young man from committing himself to the life of a Carthusian.

Even as a married man, More had lived much less ostentatiously than the typical Tudor courtier. He was generous and hospitable but never glamorous. The habit of wearing a hair shirt beneath his clothing that he had picked up while living in the monastery was maintained for the remainder of his life. Striving to serve his country and the people, More was hesitant to become too close to the king. Despite being Henry's confidant and having been awarded several lucrative positions, More maintained that, "If my head would win him a castle in France, it should not fail to go."

Although More had a clear understanding of his king's willingness to sacrifice others to gain his desires, he was unafraid to challenge him. In writing Utopia, More courageously pointed out immorality and corruption in all areas of society, including government and church. As a new member of Parliament, he spoke passionately against the king's request for funds that More felt placed an unfair burden on the populace. When Henry first presented his evidence for annulment from Katherine of Aragon, More promised to research the issue but not to give his unconditional support.

Nothing he read and nothing the king could say convinced More of the righteousness of Henry's divorce. As England's Lord Chancellor, it was More's duty to serve the king and enforce the Act of Succession, which required signed oaths recognizing Henry as Head of the Church. As he refused to sign it himself, More resigned his position. Henry accepted the resignation, and More retired to his estates.

Perhaps he would have been safe yet had More studied and lived the quiet life of a country gentleman. However, he was compelled to write defenses of his faith, and he refused to attend the coronation of Anne Boleyn. More was arrested and sentenced to be hanged, drawn, and quartered - the death of a traitor - when he continued to refuse the oath. In his benevolence, Henry reduced this sentence to beheading. Before his execution, More said he was, "the king's good servant but God's first."

Thomas More, believed innocent by Protestants and Catholics alike, was beatified by the Catholic Church in 1886 and canonized in 1935.

Posted by Samantha Wilcoxson at 8:58 AM 15 comments:

It took a lot of nerve to defy King Henry VIII, but the remaining sons of York gave him a run for his money. While Reginald Pole stood up to Henry through intellect and the written word, Richard de la Pole was a soldier worthy to become the ideal sixteenth century king.

Like the Poles, the de la Poles were also cousins to the Tudors. Richard's mother was Edward IV's sister, Elizabeth, and his brother, John, is believed to been named heir of their uncle, Richard III, after his son's death. John de la Pole died in the Battle of Stoke in 1487, an unsuccessful attempt to remove Henry VII from the throne of England. He was survived by three brothers carrying equal amounts of royal blood: Edmund, Richard, and William.

Edmund was the next oldest after John, so he inherited his title, though Henry VII reduced him from duke to Earl of Suffolk. Edmund was betrayed by his Burgundian allies in 1506 and was imprisoned in the Tower of London until executed by Henry VIII in 1513. William was imprisoned alongside him, but lived there until he died in 1539. Richard, however, remained on the Continent. It was his alliance with the French that brought the English king's wrath down on his brother. With Richard out of reach, Edmund was sacrificed to Henry VIII's lust for blood.

Richard learned from the older brothers' failures and worked to build a name for himself in Europe before attempting to gain allies and build an army that could invade England. After all, if John, already in England and with the support of Yorkists relatively close to Henry Tudor's rise, had failed, what hope did Richard have of a successful invasion a quarter of a century later? Edmund had depended upon the support of European leaders and had been turned over to Henry, leaving his remaining followers living in squalor.

The younger de la Pole brother was clever and patient, seeing that leaders of Europe might recognize him as a challenger to the English king but not back it up with cold, hard cash in support. He claimed the family title of Duke of Suffolk and became known as White Rose, although he had not set foot in England since years before Henry VIII became king. Richard wanted to succeed where his brothers had failed, and to do so he would need to convince people that he was a risk worth taking. Those searching for someone to challenge the Tudor tyrant found their man in the shrewd and capable Richard de la Pole.

King Louis XII recognized both Richard's talent as a soldier and the opportunity to rid himself of the Tudor king. He awarded Richard with a pension and large French force to command, making Richard an obvious threat to Henry VIII. Plans to invade England were considered multiple times, but Richard never felt that his chances of success were worth the risk.

Henry attempted to delegitimize Richard's claim by making his friend, Charles Brandon, duke of Suffolk in 1514, taking away the de la Pole's ancestral title and giving it to an upstart. In response, Richard accumulated troops and ships with the help of the French king and prepared for invasion. Before it could commence, Henry and Louis made peace, and Richard was sent to Lorraine.

Francis I became king of France in 1515. In the meantime, Richard had grown comfortable in Metz where he was treated like a prince, even sometimes referred to as Richard IV, without having to go through the trouble of attacking England. As he would in later decades with Reginald Pole, Henry sent assassins after Richard de la Pole. They were no more successful than was Henry himself on the field against the French. Henry's actions sent more support Richard's way without any effort on his own part. Francis vowed to assist Richard in claiming the English throne.

Richard evaded assassins as he raised troops and conspired with Francis. Rumors occasionally hounded Henry that Richard would soon attack. In 1522, France and England were again at war. However, a more opportune time to claim England's throne never arrived. Richard discarded plans made with Francis I and the Duke of Albany to invade England in 1523. Instead, he was serving Francis when he was killed at the Battle of Pavia in 1525.

Posted by Samantha Wilcoxson at 6:00 AM 2 comments: