The York Remnant Under Tudor Rule 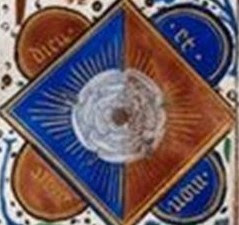 I have written a new post for the Henry Tudor Society that looks that the Yorkists who remained after the Tudor dynasty began. Here is a snippet:

For those of us looking centuries back through history, it is easy to end the dynasty of the Plantagenets and begin that of the Tudors with a clean line drawn through 1485. The truth for those who survived the Wars of the Roses was much more complicated. . . .


To keep reading, visit the Henry Tudor Society website. I appreciate them welcoming me, once again, as a guest blogger.

Posted by Samantha Wilcoxson at 11:12 AM No comments:

The wonderful bibliophiles at The Review are currently featuring my book, Plantagenet Princess, Tudor Queen! Visit their blog for a kind and thoughtful review as well as the opportunity to enter a drawing for a signed copy.

Here is just a sample of what reviewer Sharon Bennett Connolly has to say about it:

"Plantagenet Princess, Tudor Queen is a delightful novel portraying the life of England's first Tudor Queen, Elizabeth of York. Well written and researched, the author's passion for her subject shines through on every page, drawing you into every aspect of Elizabeth's life, from the men in her life, to her siblings and her children."

Read more at The Review! 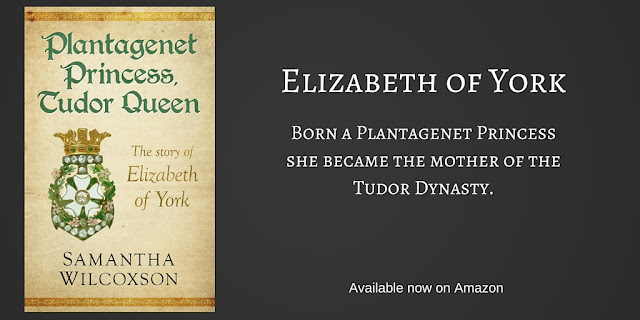 Posted by Samantha Wilcoxson at 12:12 PM No comments: 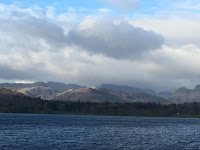 Many regions of England appear to come straight from one's imagination or a storybook. No place is this more true than in the Lake District. Low mountains that clouds have settled to rest upon create hiding places for crystal clear lakes, bubbling streams, and winsome thatched roof houses. 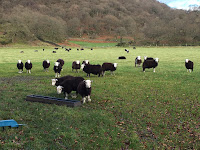 Exploring this area, one also sees many of the sheep that have been part of the Lake District economy since the middle ages. Stone fences leave meandering lines across the hillsides in a casual attempt to keep the community herds separated. When they do mingle, splashes of different dye colors across the animals' backsides identify each sheep's owner.

Lake Windermere is a defining feature of the Lake District. A long, narrow lake that has naturally occurred within a glacial gash, Windermere is a National Park and England's largest lake. The town of Windermere is just one of several that dot the countryside, suddenly appearing as you overtake an incline or peek around a hill. 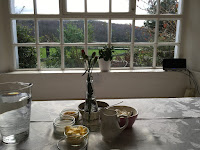 One person who made a great effort to preserve the idyllic nature of the Lake District was author Beatrix Potter. Her 17th century house is kept much as it was when she was alive, and we were blessed enough to enjoy fresh scones and tea there. Those dried up things that we Americans call scones have no resemblance to their tasty English cousins! During her lifetime, Potter spent much of her earnings to purchase Lake District properties and save the region from commercial development. Her efforts have reached into modern day, with subsidies in place to enable sheep farmers to carry on as they have for hundreds of years. 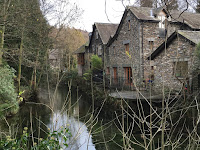 If the very home of a storybook writer is not a fantastic setting enough, you can make your way to Grasmere. In this little village full of quaint stone buildings, it is easy to believe that you have stepped into another place and time. This tiny community has a lot to offer, including St. Oswald's Church where one can visit the grave of William Wordsworth. 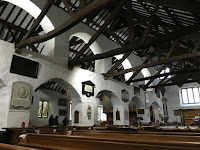 By this time, you will already have no wonders about how he was so inspired to write within these surroundings. The church stands on a site that has been home to a Christian congregation since the medieval King Oswald's reign in the 7th century. Portions of the current church date back to the 14th century with numerous additions and improvements made in the intervening years. 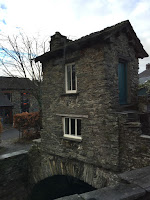 Not far from Grasmere, Ambleside is another picturesque village made up of ancient cottages. One with a past as interesting as its architecture is the Bridge House. This unique building was originally constructed above water rather than land as an early form of tax evasion. The minuscule two room house has been home to an apple store, a family with six children, and a recruitment center during its varied history.

For an area that is famous for its pleasing rural beauty, the Lake District has many interesting stops and historic places to offer to adventurous explorers.
Posted by Samantha Wilcoxson at 10:57 AM 11 comments:

Yesterday was my birthday. This is not an event that I normally get too excited about or want too much recognition of. However, this year I got to spend the evening of my birthday at the Local Author Night at Schuler Books! If you are in the Lansing area, you can find my books, Plantagenet Princess, Tudor Queen and Over the Deep, at Schuler Books in the Meridian Mall.


Thank you to everyone who has supported me and especially those who joined me for this event! It was such a great evening that I hardly had time to be worried about the milestone birthday that I was having.  ;-)

My next book signing event will be in Jackson, Michigan at the Book Cottage on June 25th. I look forward to meeting some of you there!

See Upcoming Events for more information and opportunities to talk books with me.

In other news, Star Isales has won the giveaway for Tony Riches' JASPER: Book Two of the Tudor Triilogy! Thank you to everyone who entered. Make sure you check out all of Tony's awesome novels.

My next novel, Faithful Traitor: The Story of Margaret Pole will be released June 14th. It is available now for pre-order on Kindle.