When George Washington and his men realized that General Benedict Arnold had fled in the wake of the revelation of his treasonous plot, no man present thought to question the innocence of Arnold's wife, Philadelphia socialite, Peggy Shippen. Alexander Hamilton wrote, 'All the sweetness of beauty, all the loveliness of innocence, all the tenderness of a wife and all the fondness of a mother showed themselves in her appearance and conduct. We have every reason to believe she was intirely unacquainted with the plan.' Marquis de Lafayette agreed. 'The unhappy Mrs Arnold did not know a word of this conspiracy....The horror with which her husband's conduct has inspired her, and a thousand other feelings, make her the most unhappy of women.' Even Washington claimed to have 'every reason to believe she is innocent.'

Why were they all so thoroughly convinced?

Pop culture television shows and historical novels tend to portray Peggy Shippen as a vapid teenager when she met British Major John Andre during the occupation of Philadelphia. Biographers Jacob and Case don't believe this is accurate, noting comments of contemporaries who describe Peggy as 'gentle and timorous' with 'great purity of mind and principles ' and being 'particularly devoted to her father, making his comfort her leading thought, often preferring to remain with him when evening parties and amusements would attract her sisters from home.'

Peggy is often also romantically connected to Andre in retellings of her story. While there is no more or less to connect him to Peggy than several other ladies, Peggy is believed to have kept a lock of Andre's hair until she died on 24 August 1804, long after his 2 October 1780 execution. However, there is no documentation of her ever mentioning his name during that time.

Had Shippen and Andre formulated a plot for her to ensnare the crippled, older general? Andre's business was the gathering of information, so he surely knew something of Arnold's dissatisfaction with the American congress. Did he leave instructions with Peggy when the British left Philadelphia, or was her marriage to Benedict Arnold her own idea? Did she love him or was he simply a piece of her greater plan?

Arnold was paid well by the British for turning traitor, even though he brought them no great prize and cost them an intelligent, young officer when Andre was captured. What George Washington did not know is that Peggy also received a pension for her part in the plot. As Jacob and Case noted, ‘In an era when female intelligence and talents were often dismissed, women held one advantage: They were rarely suspected of elaborate crimes.’ Only much later, when some of Sir Henry Clinton's papers were donated to the University of Michigan, would the fact that Peggy had corresponded with the British herself be revealed. It is no longer possible to believe that Peggy was not involved in the plot, but it remains unknown whether treason was her reason for marrying Arnold in the first place.

After their plot fell apart, the Arnolds joined the British in New York, where the general was less than welcome. He provided no great service, and his advice to move troops out of Yorktown was ignored, leading to the British surrender. After the war, the Arnolds lived in England and Canada, struggling financially and never grasping the success they must have dreamed of when they turned against their country.

Read more of Peggy Shippen Arnold's story in Women of the American Revolution, coming in July 2022 from Pen & Sword. 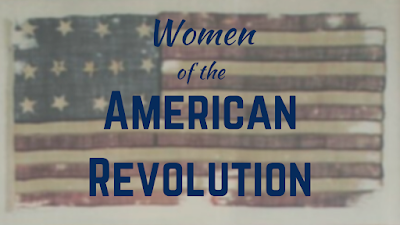 Posted by Samantha Wilcoxson at 12:00 AM No comments:

History in Fiction: Getting the Balance Right

I recently had the honor of participating in a Historical Writers Forum panel on getting the balance right when writing historical fiction. It was exciting to join great names like Elizabeth Chadwick, Carol McGrath, and Sharon Bennett Connolly! Since the discussion was recorded, you can watch it now too!

Posted by Samantha Wilcoxson at 10:45 AM No comments: