Gwenllian the Lost Princess of Wales

As part of Women's History Month, I am pleased to welcome Patricia Lennan. She joins us with the history of a Welsh princess whose story has been partially lost. Patricia sheds some light on Gwenllian the lost princess of Wales.

Gwenllian the Lost Princess of Wales

The year 1277 was a tumultuous time in Welsh history. Having fought many campaigns to secure the independence of his beloved country, Llywelyn ap Gruffydd, known as the last true native Prince of Wales, was forced to acknowledge the English king as his sovereign. Llywelyn signed the Treaty of Aberconwy with King Edward I, stripping him of all but a small portion of his lands. Soon after this, however, he did gain the hand of Edward’s cousin, Eleanor de Montfort, daughter of Simon de Montfort, to whom he had been betrothed for many years. Edward had previously prevented them from marrying. According to many historians the marriage was a love match, quite unusual for nobles of that era.

A few years of peace followed, but on Palm Sunday 1282, Llywelyn's brother, Dafydd ap Gruffydd, stirred up a revolt which quickly spread to other parts of Wales, a revolt which Llywelyn reluctantly felt obliged to join. Into all this turmoil little Gwenllian was born on 12 June at Abergwyngregin, one of the prince’s courts. Sadly, Eleanor died in childbirth leaving their only child motherless. Gwenllian was never to remember much of her father either, if anything at all. He was killed that December, it is believed, by the king’s men.

Eleanor and Llywelyn only had four years together, but Gwenllian had no time with them at all. Surprisingly, the king saved her life, but tragically he had her abducted at just nine or ten months old. Gwenllian was taken to a Gilbertine convent in Sempringham, Lincolnshire. Here she remained locked up until, it is believed, she died in 1337. Some historians believe that she knew nothing about who she really was or where she came from. Others have different theories.

Very little has been recorded about Gwenllian's life. As to whether she became a nun or not, opinions vary. But according to The Chronicle of the Princes, an early Welsh manuscript, she was made a nun ‘against her wishes’.

Her life was certainly very different in the priory, surrounded by the flat fenlands of eastern England, to how it should have been in the courts and the hollows and hills of the magical countryside of North Wales. The nuns were forbidden to communicate with the outside world, unlike the canons who shared part of the priory and were at liberty to come and go.

Some peasant women at that time may have indeed envied the nuns to some extent, as at least the nuns were reasonably fed and had warm clothing. They also received an education, which was quite a progressive idea in Norman England.  However, worship and intercession were the main business of a nun’s life in Sempringham Priory. These were incorporated in an endless cycle of prayer and work. 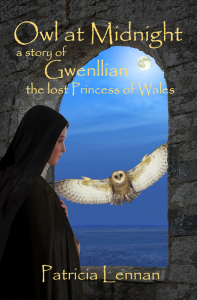 Was Gwenllian a rebel or did she meekly accept her position?  Whichever it was, she was lost to us for many years, the memory of her faded into obscurity or virtually erased from history until a few years ago when The Princess Gwenllian Society was formed to honour her memory. Being the daughter of a feisty Welsh prince and beautiful, intelligent, kind mother, I’m sure she would have possessed extraordinary qualities. I could see her riding her horse through the rolling hills of her native country, proud and determined. Maybe that is how she saw herself, if only in her dreams.

Wales has a reputation for being a land of myths and legends, harbouring magic in secret places, the rivers and valleys echoing with ancient tales. Gwenllian had been hidden away from the world, not just in the convent, but for hundreds of years. I wanted to tell her tale and let her voice echo across the centuries.

Owl at Midnight: A Story of Gwenllian the Lost Princess of Wales is available at Amazon and Little Knoll Press.

Posted by Samantha Wilcoxson at 7:43 AM No comments:

I am happy to welcome Brenda W Clough to the blog today! She is a prolific writer in several genres and a fellow member of the Historical Writers Forum, where we are celebrating Women's History Month. Brenda shares with us the darker side of Charles Dickens - how he treated his wife.

He was famous, but Charles Dickens was a difficult husband. There was that whole writing thing, of course, the twenty novels that are part of the foundations of English literature, the thousands of articles and letters to newspapers, the founding and editing of a couple major magazines, the campaigning for social justice and the rights of the poor.

But his wife Catherine also had to live with him. We would describe him as a micromanager. For many years he insisted on doing the grocery shopping, not something that gentlemen did in the mid-19th century. He made all the housing and home décor decisions. And he fathered ten children with Catherine.

So in 1857, when Charles fell in love with a pretty 20-year-old actress, Catherine was in big trouble. Divorce was legal, but impossible. The laws were lopsided, heavily favoring the husband. She would have to prove more than adultery. She’d have to prove brutality or some other extenuating circumstance. He was the social conscience of Britain – no judge would believe it.

Meanwhile Charles was also frustrated. He’d been discontented with his marriage for a few years already. By writing classics like A Christmas Carol and Oliver Twist he’d set himself up as a pillar of Victorian morality, a defender of the oppressed. To divorce the mother of his ten children after over 20 years of marriage would make him look like a skunk. His career, his entire social status, was built upon a perception of rectitude. He couldn’t do it.

So Charles did it the dirty way. He began a campaign in letters and conversation with friends, creating excuses to get rid of his wife. Catherine was a bad mother. She was an uncongenial partner, fat and no longer pretty. They hadn’t had sex in years.  She never did any of the work around the house. She was nervous, semi-invalid, had the vapors, was probably insane.

He was Charles Dickens, the most famous author of his time. The PR campaign he geared up was utterly convincing – until you actually looked at the situation. Ten children, could you really believe that they weren’t congenial partners? And, hello – who wouldn’t lose her figure, after ten pregnancies? Which would also account for being semi-invalid. Many observers agreed it was pretty seedy of Charles, to ditch his wife of 22 years for a mistress the same age as his daughter. Even his best friends urged him to stick with Catherine. Enough of social circle believed her, not him, to split literary London into hostile camps.

Charles’s goal was to get Catherine out of the house and out of his life. There was no way that she could stand up against his writing powers. And the hints of mental problems were a warning. More than one obstreperous woman in the period had been railroaded into an asylum by relatives. A faked diagnosis of insanity is the backbone of THE WOMAN IN WHITE, the novel by Wilkie Collins.

So Catherine folded, signing a settlement in 1858 that conceded they were separated. Charles could afford to set her up in a separate household in London and pay her 600 pounds a year. He kept the family home and the kids. Only the oldest, Charles Jr., was of age and able to make his own decisions. Significantly, he chose to live with his mother. Catherine declared to relatives that she still loved Charles.

Most importantly, Charles hung onto his reputation. People mostly believed the famous writer, not his chubby wife. Catherine retreated into a secluded life, seeing only family and friends. Meanwhile Charles did worldwide tours, reading aloud from his works to packed audiences. He continued to write novels until the end of his life. He retained his mistress Ellen Ternan, who left the stage to be with him.

In spite of her public humiliation, Catherine still held the ace card. A legal separation wasn’t divorce. Catherine was still Mrs. Charles Dickens, his legal wife. Charles couldn’t marry Ellen, couldn’t take her to parties or into his social life. And when he died, Queen Victoria sent the condolence telegram to Catherine, not Ellen. Catherine’s final move was to leave all her letters from Charles to the British Library. They were written proof that she wasn’t insane, wasn’t a bad mother. And in them Charles declared over and over that he loved her.

Louisa Nottidge was one of the women actually incarcerated in an asylum by her relatives.

A 2011 biography of Catherine Dickens goes into much more detail.

There is also a biography of Ellen Ternan which was made into a movie.

Connect with Brenda on her website or on Facebook.
Read about more historical women at Historical Writers Forum
Posted by Samantha Wilcoxson at 12:00 AM 4 comments: