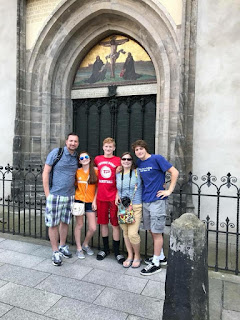 Today is the 500th anniversary of Martin Luther nailing his 95 Theses to the door of Castle Church in Wittenberg. Alright, maybe Luther didn't really do that, but one thing is certain. When Martin Luther questioned the practices of the Catholic Church in his 'Disputation on the Power of Indulgences,' he started a movement that became far more than he bargained for.

If you have been following my blog, you probably already know that I am Lutheran, so experiencing an anniversary like this is a once in a lifetime event. My family and I traveled to Wittenberg over the summer to see the very places Martin Luther lived, preached, and stirred up trouble! You can take your own virtual trip to Wittenberg here.

I am also at EHFA today blogging about Martin Luther and his interactions with Henry VIII.

Happy Reformation Day!
Posted by Samantha Wilcoxson at 8:21 AM No comments:

It is often said that Henry Tudor did not have a strong claim to the throne when he took it in 1485. However, he was quick to publicize his three-prong claim in the hopes that people not convinced by one reason would willingly accept another. With many of the branches of the Plantagenet family tree rather thoroughly pruned during the decades of the Wars of the Roses, it is somewhat surprising just how good Henry's claim was.

Tudor's strongest claim was through conquest. Regardless of the semi-royal bloodline that we will discuss next, Henry Tudor marched into England and killed its king. Richard III had left behind his heir, John de la Pole, and a few other nephews and the like, but it doesn't really matter because he was defeated on the field. While we sometimes minimize this claim, people of the time did not. John de la Pole did not fight Tudor (at least not at first), but served him, as did most noble sons of the era who could match their king's pedigree with family trees reaching back to Edward III.

Yet, Henry could also trace his ancestry back to the legendary king, and this was the second prong of his claim. Henry's mother, Margaret, was the heiress of the Beaufort line descended from John of Gaunt, which was legitimized in 1399. The Beauforts had suffered heavy losses during the Wars of the Roses in support of the Lancastrian king, Henry VI. Debate over which Plantagenet branch held a superior claim to the throne had begun as soon as Henry Bolingbroke took the crown from his cousin, Richard II. Unknowingly, Henry IV set the precedent that the crown could be taken by whichever family member was most able, rather than the one who inherited it, and his descendants suffered for it. Confusion over whether a female line should be considered and reluctance to crown children with greater claims than capable adults added fuel to the debate long before Tudor made his claim, causing bloodline alone to be a shaky foundation.

In addition to his mother being the great granddaughter of John of Gaunt, Henry's father was half-brother to the king, Henry VI. Edmund Tudor's blood was decidedly not royal, but his father had married Catherine Valois after the death of her first husband, Henry V. While Catherine could not pass on any right to inherit England's crown to the children of her second marriage, it could not hurt that Henry could call the Lancastrian king his uncle.

Henry Tudor understood that others could match his pedigree, so he planned to take a wife whose status was unquestioned and whose popularity was well-known. When he married Elizabeth of York, Tudor had already established that he took his position in his own right. However, uniting England under the joint heirs of Lancaster and York was a brilliant political move. Those who did not believe in Tudor's claim were likely to support him for the sake of his wife. The union went far toward securing peace and acquiescence to Tudor rule. By timing the wedding when he did (after his own coronation), Tudor ensured that Elizabeth strengthened his claim rather than making it her own.

The fact of the matter is that anyone who might have made a grasp for the throne of England by 1485 had just as questionable of a claim as Henry Tudor. That is precisely how the Wars of the Roses began in the first place with York proposing that their line was superior to that of the sitting Lancastrian king. With so many noble sons dying on the field and disagreements on just which Plantagenet heirs had superior claims for almost a century before Tudor's victory, a claim of bloodline alone was simply not sufficient to bring about peace.
Posted by Samantha Wilcoxson at 1:13 PM 4 comments: 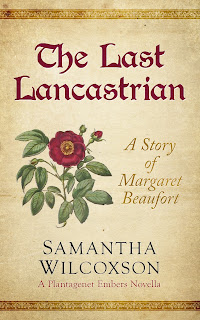 I have been keeping a little project to myself, but I am excited to share it with you today. The Last Lancastrian: A Story of Margaret Beaufort is available NOW. That's right. No pre-ordering & no waiting. Get a glimpse of Margaret long before she dreamed of a Tudor dynasty in this novella prequel to the Plantagenet Embers Trilogy.

Also on Nook at Barnes & Noble!

Read an early review at Knight of Angels!
Posted by Samantha Wilcoxson at 3:33 PM 2 comments:

It may seem crazy for me to say that Wittenberg was one of my favorite destinations during a trip that included powerhouses like Paris, Florence, and Rome, but there it is. This little town, which one can easily stroll through in under 30 minutes had this Lutheran girl captivated from the moment I stepped off the train to see the building-sized 'Die Bibel' towering over me. Add in a few billboards marketing 'Luther-burgers' and posters shouting 'Luther!' and the anticipation was killing me by the time we reached Lutherhaus.

Maybe I need to back up a bit. For those who do not have an obsession special interest in Martin Luther, the little village of Wittenberg (actually Lutherstadt Wittenberg) is where an unremarkable monk performed an act that would rock the world from its foundations almost exactly 500 years ago. When he nailed his 'Disputation on the Power of Indulgences' - or as they are much better known, the 95 Theses - to the door of Castle Church on October 31, 1517, Martin Luther had no idea what he was getting himself into.

That church and the parish church where Luther spent much of his time preaching still stand in Wittenberg within view of each other and connected by a quaint cobblestone street. The entire area is now a UNESCO World Heritage site. I could go on and on about the history of Martin Luther and the Reformation, but let's just take a look at Wittenberg itself.

Upon entering Wittenberg, I had the wondrous sensation of being surrounded by an entire community that was just as enthusiastic about Martin Luther as I was. This doesn't happen in my lovely little hometown in Michigan. Just seeing his name and image everywhere I looked made me smile. What other Lutherans may not even realize is that Luther is known in Germany for more than his epiphany regarding the grace of God. He is widely revered as the father of the modern German language due to his extensive Bible translation work and other writings.

Lutherhaus is one of the first places you encounter when entering Wittenberg. This former Augustinian monastery was home to Martin Luther when he was a monk and later became his family home, which was generously shared with a large variety of students and visitors. Now, it serves as a Reformation museum and something of a welcoming station for those visiting the village. One of the well-preserved rooms of the house is the living room where Luther held his famous Table Talks. The cozy atmosphere found within this sprawling structure gives life to the real family that lived within these walls.

Other rooms were filled with pamphlets written by Luther, a thick first edition of the Bible translated into German, and even one of Luther's own study Bibles complete with verses underlined by his own hand! We saw 16th century priest's vestments, paintings, and even an old trunk used for carrying all those coins paid for indulgences.

And that was just at Lutherhaus. Due to our time being limited by the train schedule, we had to move on to see the rest of Wittenberg, though I could have spent hours taking in everything that was available here.

Continuing in Luther's footsteps along the 'historic mile' takes one past shops featuring every imaginable product with Luther's name or face emblazoned on it. I refrained....mostly. We went home with a Lutheran rose decal for my car, a Martin Luther shot glass, and a bottle of 'Reformator' liquor. Anyway, this walk will also take you past the home of friend of Martin Luther and fellow reformer, Philip Melanchthon. This building is an example of renaissance architecture and holds an exhibit of the Augsburg Confession. The steeples of Luther's parish church of St Mary's can also be seen upon exiting Lutherhaus.

Martin Luther gave hundreds of homilies inside this ancient church. With portions of it dating back to the 12th century, it is the oldest structure in Wittenberg. The key features of the church are the Protestant altarpiece and the baptismal font which was part of the church when Luther's own children were baptized there. This church was also the location of Luther's wedding when he married former nun, Katharina von Bora.

The Town Hall is only steps away from St Mary's and is home to a large statue of Martin Luther in its courtyard. Philip Melanchthon is also featured here. The pair are also found together near the altar of All Saint's, or Castle Church, the next stop on our trip through Wittenberg.

Walking toward Castle Church, it is obvious that necks are craning and eyes are straining for that first view of The Door. Unfortunately, the door, at least the original one which served as a community bulletin board of the 16th century, no longer exists. A steel door embossed with the words of the 95 Theses now stands in place of the destroyed wooden original. It is no less amazing to stand in front of it and know that this is where the first, maybe only vaguely interested, people stood and read Martin Luther's bold remarks about the corruption in the Catholic church.

Our tour guide and at least one book that I have read point out that it is unlikely that Luther actually nailed the theses to the door himself as history remembers. While he was not yet the famous figure he would become, Luther was an important man with servants and students to perform menial tasks such as this for him. Or maybe he, sensing that this was an important document that he might need to defend and discuss, did it himself. Does it really matter?

Not to me. I was thrilled just to be standing there.

Inside Castle Church, the air is thick with the cloud of witnesses that have worshiped there. Upon the tower of the church are engraved the words "Ein' feste Burg ist unser Gott" (A Mighty Fortress is Our God), and one can imagine a congregation, led by Martin Luther himself, singing it with their voices reaching the high arched ceiling above. In Luther's time, this was the new church, having been built in 1506. The graves of Luther and Melanchthon are found near the altar of this church made famous by their work as reformers. When Luther was buried there in 1546, it was Melanchthon who preached at his funeral.

It was such a blessing to visit this amazing town as it was preparing for the 500th anniversary of the posting of the 95 Theses. If you are ever in Berlin, I highly recommend you hop on the train and make your way to Lutherstadt Wittenberg and spend a day walking in Martin Luther's footsteps.
Posted by Samantha Wilcoxson at 7:35 AM 4 comments: