A Brief History of Pew Rental


A few days ago, I posted some pictures of Christ Church in Philadelphia, including the pews rented by Betsy Ross and Benjamin Franklin, and was surprised by the number of comments inquiring about pew rental. Most were curious, others horrified, but I saw an opportunity to look into were this practice originated and what caused it to fall out of style.
Pews started appearing regularly in churches around the time of the Reformation in the early 16th century. Before this time, people typically stood or, if the occasion required, brought their own portable seating. The building of permanent pews or pew boxes was originally funded by those willing to contribute to the cause, thereby also reserving their seat, much like purchasing a seat at a benefit dinner today, though open benches were often placed in the back of the church for those unable or unwilling to rent a private space.
This form of church fundraising became particularly popular in America where tithing was not required by law and the church was not supported by the government. Pews might be rented at a set rate or auctioned off to the highest bidder. Since the pews were rented or purchased, the church could also pass on maintenance expenses directly to the congregation members. One might receive a letter of reprimand if one's pew was in need of cleaning or your kneeling cushions had grown shabby.
Pew boxes and pew rental started falling out of fashion in the 19th century. One reason you have probably guessed. Forcing parishioners to pay for the best seats caused too much of a distinction between the haves and the have-nots in a setting where worshippers are supposed to be storing up their treasure in heaven. Pew boxes also took up more space than open benches, so more people could attend if the private pews were replaced.
Since pew boxes at some churches were purchased rather than rented and passed down as family property from generation to generation, some pushed back against abolishing them. Some churches made the transition gradually, allowing free seating in unrented pews until all current rents had run out. Many churches had some form of pew rental into the mid-20th century.
As churches moved away from pew rental, many of them adopted the weekly giving envelopes that we are more familiar with today. Don't forget to put enough in there to cover the cost of replacing those old cushions!
All photos property of Samantha Wilcoxson
Posted by Samantha Wilcoxson at 12:00 AM 2 comments:

The Duke of Milan and a Reason for Espionage 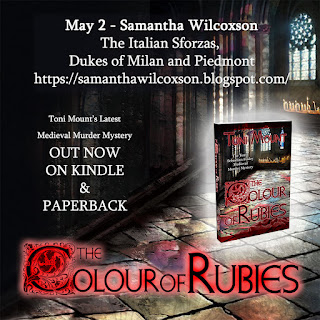 Toni Mount has been a guest before, and I highly recommend her Sebastian Foxley series. Get caught up before reading her newest installment, The Colour of Rubies.

The Duke of Milan and a Reason for Espionage

When I was first thinking about The Colour of Rubies, the tenth Sebastian Foxley adventure – I have to write to suit the title because this is already agreed in my contract – I had just finished reading a biography of Christopher Marlowe, an Elizabethan playwright and a spy and this gave me the idea that my sleuth, Seb Foxley, should become involved in uncovering espionage at the court of Edward IV – apparently, every European monarch employed spies to check out what his fellow rulers and even his own noblemen were up to. I researched secret codes, couriers and go-betweens mostly from the Tudor era as this period is better documented, especially regarding Catholic spies but since religion wasn’t much of an issue in England in 1480, I needed the spies to have some other treasonous intent. Political expansion and war are always reasons for dastardly deeds so I searched medieval Europe for ideas.

In recent Seb Foxley novels, his brother Jude has introduced an Italian element to the stories by marrying a young Venetian girl. His intentions were mixed but he always likes to stress it was a noble deed in that he saved her from a hateful marriage to a vile old uncle by eloping with her and was then conned into making her his wife. Whether readers believe anything Jude says is up to them.

So, the groundwork was already done to introduce an Italian spy and – how lucky can an author be? – I discovered that the Dukes of Milan and the Kings of France both desired to extend their boundaries to include the alpine area of Piedmont, nominally part of the dukedom of Savoy but lying between their own territories. Duke Sforza of Milan wanted the French to be looking north and, while their attentions were elsewhere, he could grab Piedmont… if only the English would attack the French. Obviously, this required a dark deed to cause the English to invade northern France.

But who was the Duke of Milan in 1480? The Sforza family were Dukes of Milan for nearly a century, ruling the city state from 1450 until 1535. Previously, the Viscontis had ruled Milan and in 1441, Francesco Sforza married Bianca Maria, the illegitimate daughter and only heir of the last Visconti duke, Filippo. When Filippo died in 1450, Francesco Sforza succeeded to the dukedom in right of his wife. Francesco and Bianca had a large family but their eldest son, Galeazzo Maria, and fourth son, Ludovico, are of most interest.
Galeazzo was born in 1444 and became duke at the age of twenty-two in 1466 when his father died. An unpleasant individual described as a cruel, womanising tyrant, we must feel sympathy for his wife, Bona of Savoy. [Bona had once been proposed as a possible bride for King Edward IV only to be rejected in favour of Elizabeth Woodville.]
Galeazzo’s younger brother, Ludovico, was born in July 1452 and, as a fourth son, wasn’t expected to inherit much, if anything. Despite this, his mother made sure he was well educated in humanist philosophy and the culture of the Renaissance, government and warfare. This was fortunate for Ludovico because, in 1476, the hated Galeazzo was assassinated. It’s thought that his killers were inspired by the attempt to murder Lorenzo de’ Medici made earlier that year because there were similarities. Galeazzo’s son and heir, Gian Galeazzo Sforza, was only seven and Uncle Ludovico – nicknamed Il Moro, the Moor, because of his dark colouring – became his guardian and determined to rule Milan as regent. However, young Gian’s mother, Bona of Savoy, contested Ludovico’s right to rule and it wasn’t until 1481 that the uncle won that contest. [That probably means that the regent couldn’t have set his mind to grabbing Piedmont in 1480 as he would have been busy ousting Bona from power but I’m allowed a year’s licence – it is a novel after all.]
Ludovico immediately imprisoned Gian, although he allowed him to receive a number of diplomatic envoys and, when the young man died in suspicious circumstances in 1494, it was rumoured that Ludovico had poisoned him. Ludovico now assumed the title Duke of Milan. So the duke at the time of The Colour of Rubies, in 1480, was actually Gian Galeazzo Sforza but he was only eleven years old and it would have been Uncle Ludovico, as regent, who employed the spies at the English court.
Ludovico’s most famous legacy to the world is The Last Supper mural which he commissioned from Leonardo da Vinci for the Convent of Santa Maria delle Grazie in Milan.
His later life reads like an adventure story: multiple mistresses, despite his wife, Beatrice d’Este, being his one true love who he mourned for the rest of his days after she died in childbirth; fighting the French; losing, regaining and losing Milan again. The Dukes of Milan never did get to rule Piedmont. The King of France won that argument after Ludovico invited Charles VIII to assist him against the combined forces of the Spanish King of Naples and Pope Alexander VI in 1494. Charles, not content with adding the kingdom of Naples to the kingdom of France, took Piedmont and then the city state of Milan itself. Realising his mistake in trusting the French king, Ludovico allied himself with the Emperor Maximilian I and beat the French in 1495. Now confirmed as Duke of Milan, the business of alliances was always complicated and Ludovico hoped to improve his situation further by playing off the emperor and the French king against each other. It didn’t work.
In 1498, the French were back, now with a new king, Louis XII, and drove Ludovico out of Milan. Nobody was willing to support the perfidious duke and he was taken prisoner by the French. He spent the rest of his days in captivity, dying in May 1508 in a castle dungeon, following a failed attempt to escape.
This is the man referred to as ‘Leone d’Oro’ or the ‘Golden Lion’ in the Italian coded letters in the novel – the badge of the Sforza family.
If you want to find out what trouble Ludovico Sforza causes Seb, his family and friends, you can join them on their exploits in medieval London and Westminster in my new novel. Join them as they steal down dark alleyways, wait nervously in opulent chambers and freeze their fingers off in the icy scriptorium where a murderer lurks. Read about the spying and other dirty deeds aplenty in The Colour of Rubies, by Toni Mount, published 5th May 2022.

The Colour of Rubies 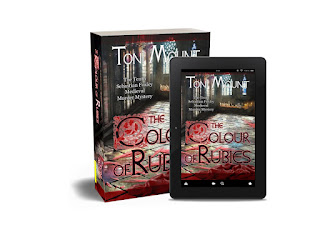 Murder lurks at the heart of the royal court in the rabbit warren of the Palace of Westminster. The year is 1480. Treason is afoot amongst the squalid grandeur and opulent filth of this medieval world of contrasts. Even the Office of the King’s  secretary hides a dangerous secret.
Meeting with lords and lackeys, clerks, courtiers and the mighty King Edward himself, can Seb Foxley decipher the encoded messages and name the spy?
Will Seb be able to prevent the murder of the most important heir in England?
All will be revealed as we join Seb Foxley and his abrasive brother Jude in the latest intriguing adventure amid the sordid shadows of fifteenth-century London.
Pre-order now. Available worldwide May 5. 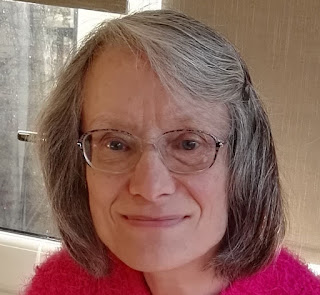 Toni Mount is the author of several successful non-fiction books including How to Survive in Medieval England and the number one best-seller, Everyday Life in Medieval England. Her specialty is the lives of ordinary people in the Middle Ages and her enthusiastic understanding of the period allows her to create accurate, atmospheric settings and realistic characters for her medieval mysteries. Her main character, Sebastian Foxley is a humble but talented medieval artist and was created as a project as part of her university diploma in creative writing. Toni earned her history BA from The Open University and her Master’s Degree from the University of Kent by completing
original research into a unique 15th century medical manuscript.
Toni writes regularly for both The Richard III Society and The Tudor Society and is a major contributor to MedievalCourses.com. As well as writing, Toni teaches history to adults, and is a popular speaker to groups and societies.
Connect with Toni at ToniMount.com. 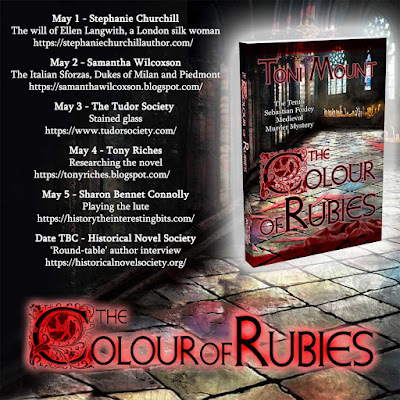 Posted by Samantha Wilcoxson at 12:00 AM No comments: