How to Determine if Your Opponent is a Nazi 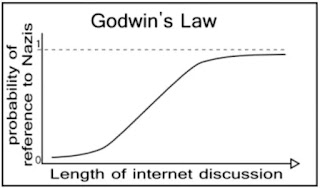 The habit of comparing those we disagree with to Nazis of the 1930s & 1940s has escalated to epic proportions. Any political opponent, any group one may disagree with (strongly!), and anyone daring to base their opinion on a different worldview is called a modern day Nazi by someone. During the last presidential campaign, I saw memes and articles battling it out over whether Hillary Clinton or Donald Trump was the next Hitler.

The truth is that neither of them are anything close to what Hitler was, and I may not know who your political opponents are but I promise they are not modern day Nazis either. (Even those actually calling themselves modern day Nazis are nothing in comparison to historical Nazis.)

It says something about how far removed we are from the events of World War II that we now sling the word Nazi around as a baseless insult. We use this word, make this comparison, with little to no thought for the actual Nazi's real and numerous victims. Do we really think that those who hold different opinions than our own are just as bad as those who perpetrated the Holocaust?! 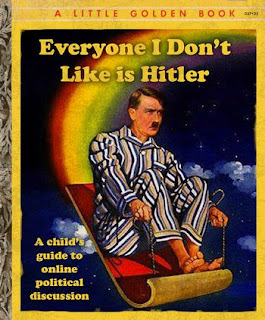 My teenagers came home from high school on 9/11 this year and one of them mentioned that people had told some 9/11 jokes at school. "That," I told them, "is how you tell the difference between the people who watched it happen and those who have only heard about it." That is how we look when we compare anyone to Nazis.

There seems to be no bounds limiting who can be called a Nazi. Conservatives call Democrats Nazis over gun control and abortion. Democrats call Republicans Nazis for immigration policies and lack of LGBT legislation. This habit has so much become the norm that there is a name for it. Godwin's law is defined as the increasing probability that a Hitler/Nazi comparison will be made the longer an internet discussion goes on. Neither US Republicans or Democrats are defined by the same beliefs as the German Nazi party. Whatever minor parallels we do see are not comprehensive enough to make these comparisons. The fact that supposed Nazi-like policies are divided between our modern day parties should be proof of that.

But those who study history have to look for the signs that caused these events to happen. We have to be careful not to look the other way as Germans did when the Nazis came to power. These are popular justifications for making the Nazi accusations of our political opponents. Therefore, I would like to consider the situation that enabled Nazis to rise to power, keep it, and use it to violently target specific groups of people. 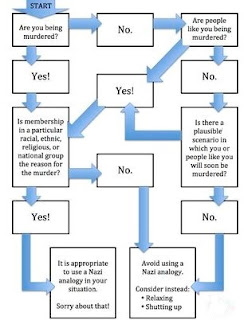 The German Nazi party was able to gain control during a time of economic depression and societal defeat unlike anything America has ever experienced. They did it during a time of divided politics that enabled them to rise to power with nothing close to a majority vote. They did it through fear and anger and the need to blame someone for Germany's problems. Once in place, the Nazis outlawed other parties, violently enforced their supremacy, and censored all media. So, let's take a step back. Our media ruthlessly critiques our political leaders, none of whom are calling for the mass jailing, torturing, or killing of any specific group of people. Neither of our main political parties have the power necessary to eliminate the other (for better or worse).

Comparing those we disagree with to Nazis demonstrates a lack of understanding of history and a lack of respect for those who suffered and died during Hitler's regime. Civil discourse is challenging, but without it we are no better than name-calling children. History can be used for good or evil; please use only for good.
Posted by Samantha Wilcoxson at 2:29 PM 2 comments: