Bosworth and the Brandons

August 22nd is famous as the date of the Battle of Bosworth and the end of the Plantagenet dynasty. It is true that Richard III died on this day in 1485 in a courageous final charge in defense of his kingdom, but the day was also a turning point for the Brandon family.

Sir William Brandon was a standard bearer for Henry Tudor, the man who challenged Richard on the field near Bosworth. William was the son of a Cambridgeshire knight of the same name and is best known for the circumstances of his death and the son he left behind. William had been a part of the failed Buckingham Rebellion, but he continued to support Tudor's claim to England, leaving behind a wife and children including an infant son to fight at Bosworth. Shortly before King Richard was brought down by a swarm of enemies, William Brandon died by his hand.

Charles Brandon was less than two years old when his father died in battle, but William's service to Henry Tudor ensured his son's bright future in a way that might never have occurred had William survived. When King Richard was killed and Tudor crowned as Henry VII, the new king was eager to reward those who had made his reign a reality. Therefore, the young son of the royal standard bearer was brought up alongside the his own children.

This privileged position gave Charles the opportunity to become a close companion to the boy who would become Henry VIII. Charles was an opportunist, eventually going so far as to marry the king's sister, Mary. Even being one of Henry's closest friends did not entirely save Charles from his wrath after this treasonous move. The couple was fined and removed from court for a time but were eventually forgiven and welcomed back.

It had been Charles' only significant fall from royal favor. His relationship with King Henry brought Charles several lucrative and privileged positions and titles. At the pinnacle of his success, this son of a Cambridgeshire knight was made Duke of Suffolk, a title that had been previously held by the Yorkist de la Pole family. Charles was at Henry's side at the Field of Cloth of Gold and through his Great Matter and the Dissolution of the Monasteries.

The two sons he left behind followed him to the grave six short years later, dying of the sweating sickness on the very same day. This left Charles' daughter, Frances, as head of the family. She and her husband, Henry Grey, inherited the Suffolk title and attempted their own grasp for the crown through their daughter, Lady Jane Grey, in 1553. The Brandon family had come a long way, but this was a step too far. Both Henry and Jane were executed for treason under Queen Mary I.
Posted by Samantha Wilcoxson at 5:00 AM 2 comments: 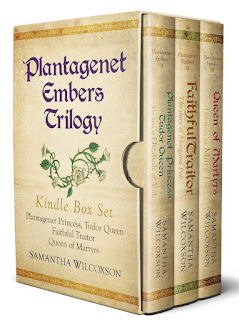 I am thrilled to announce that the Plantagenet Embers Trilogy is now available as a Kindle Box Set! When you purchase the trilogy as a set for only $9.99, it is as if you are getting one book FREE!

This set includes the full content, including author's notes, for three novels:

Plantagenet Princess, Tudor Queen: The Story of Elizabeth of York

Queen of Martyrs: The Story of Mary I

If you haven't read them yet, now is your chance to take advantage of a great deal on three wonderful summer reads!

Posted by Samantha Wilcoxson at 4:16 PM No comments: