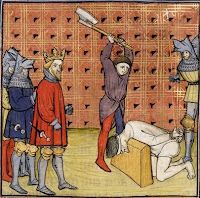 performed by various Plantagenet and Tudor monarchs. Often, in a conversation of the end of one dynasty and the beginning of the next, proponents of one king or the other are likely to pull questionable killings out of the debate arsenal. The truth is, whether you think Henry VII was a horrid usurper or saved the country from the evil villain Richard III, most of these men - and women - have some blood on their hands.

Limiting myself to the 15th and 16th centuries, I decided to take a look at executions that may qualify more as murders ordered by the kings and queens of England.

The most infamous execution under Henry IV's reign is that of Richard II. Rumors abound regarding the death of this inept king who was replaced by his royal cousin. While Richard may have starved himself as he suffered from severe depression, there is no doubt that he died under Henry IV's watch on February 14, 1400.

Unlike many who would follow him, Henry V does not have a lengthy list of Englishmen who met their end at his hands. One exception is his friend John Oldcastle who was charged with heresy. This Henry is better known for his escapades in France, where he ordered the execution of French prisoners and the starvation of women and children at Rouen.

This gentle and mentally ill monarch may not have ordered questionable executions himself, but England became a bloody killing field during his reign. Many blame his wife, Margaret of Anjou, for sending thousands of soldiers to their deaths rather than let those next in line advise Henry. Others see her as a strong example of a devoted wife and mother. However you judge her, noblemen began to die in droves until the ascendancy of Edward of York.

Edward would eventually follow the example set by his distant cousin, Henry IV, and order the death of Henry VI. Though this did not happen until 1471, after the death of the displaced king's son and heir, Edward undoubtedly saw Henry's death as the beginning of peace after two violent decades of civil war. Officially, Henry died of melancholy.

Some claim that the death of Edward of Lancaster, son of Henry VI, was also murder by Edward or his followers. All that is known for sure is that he fell at Tewkesbury, during or shortly following the battle.

George of Clarence, Edward's own brother, is another mysterious execution that took place at Edward's command. It is also one of the events that got this discussion started here.

Edward was grew bold in his willingness to clear the land of his opponents. Was this in reaction to the death of his father, Richard of York, and brother, Edmund? Richard had hidden behind armies while asking to advise the king. Edward showed no such hesitance. After Hedgeley Moor, he executed the Lancastrian leaders. He was also not afraid to pull his enemies from sanctuary.

The doomed Edward V had little opportunity to order any executions. As the 12 year old heir to Edward IV, he was soon replaced by his uncle Richard III. Was Edward a bastard or Richard a usurper? We may never know.

Before Richard was crowned, he ordered the executions of Anthony Woodville and Richard Grey. These deaths technically took place during Edward's reign, if we can even call it that, but he certainly didn't order them. Anthony was a father figure to Edward, but a threat to Richard. There is little question who truly ordered these deaths.

Richard's short reign is plagued by questionable deaths, starting with those already mentioned. The hasty execution of William Hastings is also often noted by many as evidence of Richard's ruthlessness. Hastings, a friend and counselor of Edward IV was summarily killed when Richard became convinced that he was plotting against him with Woodville allies.

Richard is also responsible for the execution of Henry Stafford, Duke of Buckingham, after his ill-fated rebellion against his one-time friend. Richard refused even to speak to Buckingham or give him an opportunity to defend himself. Though Richard is also criticized for this, it was standard procedure of the day.

Finally and most dramatically, Richard is held responsible for the murder of his nephews, Edward and Richard, better known as the Princes in the Tower. Though some have attempted to clear Richard's name of this crime, the fact remains that the two boys disappeared while in Richard's care.

Henry VII is often overlooked in favor of the more intriguing kings that bookend his reign. While some believe he deserves more credit and attention, others believe his ruthlessness is what is understated.

Henry showed himself merciful when he made the rebel figurehead, Lambert Simnel, a member of his household rather than having the boy executed. However, Henry would later execute others with eyes for his throne. Perkin Warbeck, Edward of Warwick, and Ralph Wilford each met this end. Henry also sent assassins after Richard de la Pole in Europe in much the way his son would later hunt Reginald Pole. 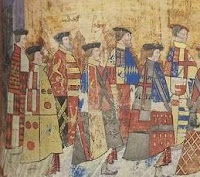 It would be possible to write quite a long list of those who fell to the ax under Henry VIII's order. Another Duke of Buckingham met a treasonous end, this one the son of Henry Stafford. Not stopping there, Henry also trumped up charges against several remaining Plantagenets, including Henry Pole, Margaret Pole, Henry Courtenay, Edmund de la Pole, and Henry Howard.

Henry was fast to cross the fine line between love and hate, executing several former friends. Most notable among these are Thomas Moore and Thomas Cromwell. Of course we cannot forget his unfortunate wives, Anne Boleyn and Catherine Howard, in addition to the several men who went to their deaths with them.

Deaths at Henry's order could fill a book, so we will simply agree at this point that he may be the bloodiest, and least predictable of the monarchs considered here.

Edward was young and advised by others throughout his reign, leaving little to accuse him of. Possibly the most shocking execution orders signed by him were for his own uncles, Edward and Thomas Seymour. The Tudors like to keep murder in the family.

Was "Bloody Mary" truly more ruthless than her predecessors or her sister? Protestants, like Thomas Cranmer, would burn at Mary's order, but the same occurred during her father's reign. She gave into pressure to have Jane Grey executed, but Elizabeth went on to make the remaining Grey sisters sorry to be alive. Mary's reign had its fair share of horrid deaths, but they were less than ordered by her father, and at least she remained consistent regarding who she stood against.

The glorious virgin queen excelled were her sister did not: public relations. Like her father, she executed noblemen who got out of line, including Thomas Percy, Robert Devereux, Thomas Howard, and, of course, Mary Queen of Scots. Several priests met their end, despite Elizabeth's reputation as

religiously tolerant. Elizabeth was also talented in punishments that did not include death. She played a decades' long marriage game with Robert Dudley (and half the other eligible bachelors in Europe), imprisoned the Grey sisters, their spouses, and children when they dared to start families that may match Elizabeth in royal blood.

Many other pieces of evidence could be brought against each of these monarchs, but in the end it may be true that they are each guilty of legalized murder. This seems inexcusable to us by modern standards, but monarchs of the 15th and 16th centuries had long precedent of using ruthless methods to ensure their power.
Posted by Samantha Wilcoxson at 5:25 PM