Daughters of the Greatest Knight 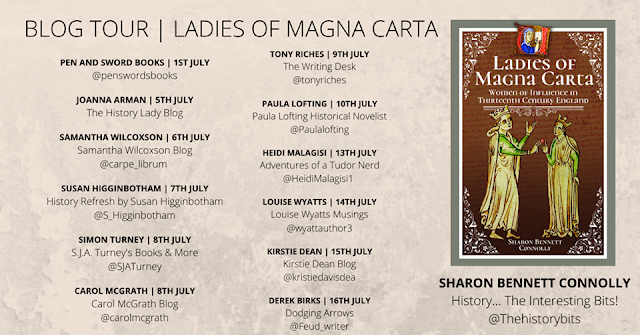 My guest today is a talented nonfiction author with a gift for shining a spotlight on medieval ladies. Sharon Bennett Connolly's latest book is an in-depth, yet accessible study of women of the 13th century, including the remarkable daughters of history's Greatest Knight, William Marshal.
Welcome, Sharon!
~ Samantha
~~~~~~~~~~~~~~~~~~~~~~~~~


The Marshal Sisters: A Guest Post by Sharon Bennett Connolly 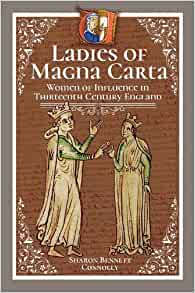 It is impossible to talk about anything related to Magna Carta without mentioning the man who has come to be known as ‘the Greatest Knight’: William Marshal, Earl of Pembroke, and his family. Marshal was one of the few nobles to stay loyal to King John throughout the Magna Carta crisis. That is not to say that John and Marshal did not have their differences, nor that their relationship was always smooth sailing. However, William Marshal was famed for his loyalty and integrity and maintained his oaths to King John throughout his reign, regardless of the distrust between the two of them.

The children of William and his wife, Isabel de Clare, cannot fail to have benefited from William Marshal’s rise through the ranks from fourth son and humble hearth knight, to earl of Pembroke and, eventually, regent for King Henry III. Their father’s position as a powerful magnate on the Welsh Marches, and the most respected knight in the kingdom, saw William’s daughters make advantageous marriages in the highest echelons of the English nobility.

Their eldest daughter was Matilda, also known as Maud or Mahelt. Given that her parents married in 1189 and she had two elder brothers, Matilda was probably born in 1193 or 1194. The Histoire de Guillaume le Maréchal wrote glowingly of Matilda, saying she had the gifts of ‘wisdom, generosity, beauty, nobility of heart, graciousness, and I can tell you in truth, all the good qualities which a noble lady should possess.’ The Histoire goes on to say; ‘Her worthy father who loved her dearly, married her off, during his lifetime to the best and most handsome party he knew, to Sir Hugh Bigot.’ Unfortunately for Matilda, her husband, the eldest son of the earl of Norfolk, was among the rebels during the Magna Carta crisis; their eldest son was taken hostage by the king when their castle at Framlingham surrendered to the royal army. It must have been a comfort to Matilda that, on John’s death, her son’s welfare would have been supervised by the new regent, the boy’s grandfather. When Hugh died in 1225, Matilda married for a second time just a few months later, to William de Warenne, Earl of Warenne and Surrey, uniting the Bigod, Warenne and Marshal families. The marriage appears to have been one of convenience rather than love but produced 2 children, a boy and a girl. Matilda’s son by her second marriage, John de Warenne, join his 3 Bigod half-brothers, Roger, Hugh and Ralph as pall bearers for their mother’s coffin at her funeral in 1248. 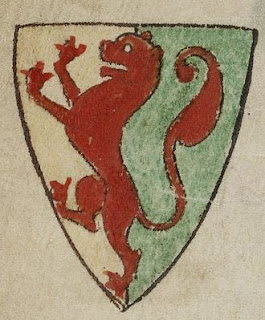 The next daughter, Isabel, was at least six years younger than Matilda, born in 1200. She was married to Gilbert de Clare, Earl of Gloucester and Hertford, who was twenty years her senior. Gilbert was the son of Richard de Clare, earl of Hertford, and Amicia, coheiress of William, Earl of Gloucester. Gilbert’s aunt, Amicia’s sister, was Isabella of Gloucester, the discarded first wife of King John, who had held the earldom of Gloucester until her death on 14 October 1217, when it passed to Gilbert. Both Gilbert and his father were named among the twenty-five barons appointed as Enforcers of Magna Carta in 1215; as a consequence, father and son were excommunicated at the beginning of 1216. After the death of King John, Gilbert sided with Prince Louis of France and was only reconciled with the royalist cause after the battle of Lincoln in May 1217, despite having married Isabel, the second daughter of the regent, William Marshal, in 1214. Like her older sister, Isabel had found her husband’s family were on the opposing side to her father in the Magna Carta crisis and the civil war that followed. They had 6 children together before Gilbert’s death in October 1230, as he returned from an expedition to Brittany. Isabel was married again, not 6 months later, to the king’s younger brother, Richard, Earl of Cornwall. The early deaths of at least 2 children put a strain on the marriage and Richard had been seeking a divorce before Isabel was safely delivered of the longed-for son and heir, Henry of Almain in 1235. Isabel herself died in childbirth, in 1240, her baby son, Nicholas, died the same day. 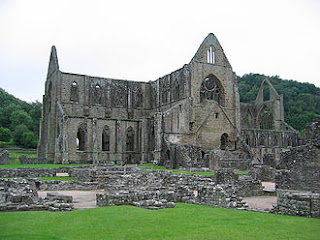 The next-youngest of the Marshal sisters, Sibyl, was born around 1201: she was married to William de Ferrers, fifth earl of Derby. Unlike her elder sisters, Sibyl and her husband played little part in national affairs. Ferrers had been plagued by gout since his youth and led a largely secluded life. He was regularly transported by litter and had never fully recovered from an accident, sometime in the 1230s, while crossing a bridge at St Neots in Huntingdonshire, whereby he was thrown from his litter, into the water. He succeeded to the earldom of Derby on his father’s death in 1247 but died in 1254. Sibyl gave birth to 7 children, all daughters: Agnes, Isabel, Maud, Sibyl, Joan, Agatha and Eleanor. Sibyl died sometime before 1247 and was laid to rest at Tintern Abbey, alongside her mother.

William and Isabel Marshal’s fourth daughter, Eva, was born in about 1203 in Pembroke Castle, and so was only 16 when her father died – and 17 when she lost her mother. As a child, she spent several years with her family in exile in Ireland, only returning to England when her father was finally reconciled with King John in 1212. Sometime before 1221, Eva was married to William (V) de Braose, Lord of Abergavenny, son of Reginald de Braose and grandson of Matilda de Braose, who had died of starvation in King John’s dungeons in 1210. William de Braose was a wealthy Norman baron with estates along the Welsh Marches. Hated by the Welsh, who had given him the nickname Gwilym Ddu, or Black William, Eva’s husband had been taken prisoner by Llywelyn in 1228. Although he had been released after paying a ransom, de Braose later returned to Llywelyn’s court to arrange a marriage between his daughter, Isabella, and Llywelyn’s son and heir, Dafydd. During this stay, Eva’s husband was ‘caught in Llywelyn’s chamber with the King of England’s daughter, Llywelyn’s wife’. He was hanged on Llywelyn’s orders, leaving Eva a widow at the age of 27, with 4 young daughters, all under the age of 10. Despite the discomfort caused by Llywelyn’s execution of Braose, the marriage of Isabella and Dafydd went ahead, following some impressive diplomacy on Llywelyn’s part. Eva never remarried and spent her widowhood managing her own lands. She was caught up the revolt of her brother, Richard, in 1234 and appears to have acted as intermediary between her brother and the king. She died in 1246. 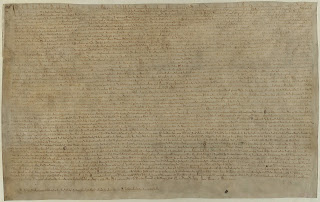 The youngest Marshal sister was Joan, who was still only a child when William Marshal died in 1219, being born in 1210. She is mentioned in the Histoire as having been called for by her ailing father, so that she could sing for him. Joan was married, before 1222, to Warin de Munchensi, a landholder and soldier who was born in the mid-1190s. When his father and older brother died in 1204 and 1208 (possibly), respectively, Warin was made a ward of his uncle William d’Aubigny, Earl of Arundel. He was ill-treated by King John, who demanded 2,000 marks in relief and quittance of his father’s Jewish debts on 23 December 1213. He was ordered to pay quickly and pledged his lands as a guarantee of his good behaviour. However, this harsh treatment drove him to ally with the rebel barons and he was captured fighting against the royalist forces, and his father-in-law, at the battle of Lincoln, on 20 May 1217. He was reconciled with the crown and served Henry III loyally on almost every military campaign of the next forty years. His marriage to Joan Marshal produced two children; John de Munchensi and a daughter, Joan, who would marry the king’s half-brother,

William de Valence, fourth son of Isabelle d’Angoulême and her second husband, Hugh X de Lusignan, Count of La Marche. It was through his wife and, more accurately her mother, that William de Valence was allowed to accede to the earldom of Pembroke following the extinction of the Marshal male line. Joan died in 1234 and so never saw her daughter marry and become countess of Pembroke in 1247.

The various experiences of the 5 Marshal daughters serve as a demonstration of the divide caused among the nobility caused by the Magna Carta crisis, with several of them finding themselves on the opposite side to that of their father. It must have caused great anxiety for a family which appears to have been otherwise very close. These 5 young women also provide a snapshot of the fates of women in thirteenth century England, death in childbirth, early widowhood and second marriages arranged for personal security rather than love. What is evident is that, just like their father, these girls were an integral part of the Magna Carta story.
Get your copy of
Ladies of Magna Carta: Women of Influence in Thirteenth Century England 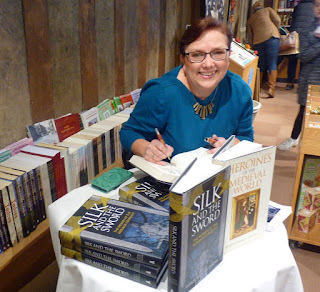 Sharon Bennett Connolly has been fascinated by history her whole life. She has studied history academically and just for fun – and even worked as a tour guide at historical sites. For Christmas 2014, her husband gave her a blog as a gift – www.historytheinterestingbits.com – and Sharon started researching and writing about the stories that have always fascinated, concentrating on medieval women. Her latest book, Ladies of Magna Carta: Women of Influence in Thirteenth Century England, released in May 2020, is her third non-fiction book. She is also the author of Heroines of the Medieval World and Silk and the Sword: The Women of the Norman Conquest. Sharon regularly gives talks on women's history; she is a feature writer for All About History magazine and her TV work includes Australian Television's Who Do You Think You Are?
Connect with Sharon on her blog, Facebook, or Twitter.
Posted by Samantha Wilcoxson at 12:00 AM