Coronation Day for Mary I

Princess Mary Tudor was crowned Queen Mary I on October 1, 1553, in an event without precedent. After fighting successfully for her birthright, Mary became England's first queen regnant. 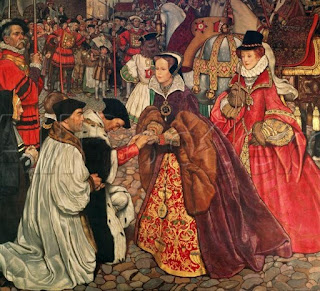 The spectacle had actually begun several days earlier when Mary arrived at the Tower of London with her sister, Elizabeth. They were welcomed with music, decorations, and a volley of the Tower guns by the mayor and aldermen of London. Time here was spent rehearsing for the coronation. Mary also met with her councillors and pledged herself, on her knees, to "the task God had been pleased to lay on her to His greater glory and service, to the public good and all her subjects' benefit." It was an emotional moment that left many of the men in tears. Then, on September 30, the sisters rode through the city to the Palace of Westminster, where the coronation ceremony would begin.

Their procession was planned to impress Londoners with the vision of everything they believed their monarch should be, and they were met by cheering crowds. Rich fabrics and vibrant colors glittered with magnificent jewels, silver, and gold. Even the horses were draped in beautifully embroidered cloth. Amid this dizzying array of wealth, Queen Mary was expected to stand out. She rode in an open chariot draped in gold. Her dress of purple velvet trimmed in ermine was complimented by the crimson velvet worn by her ladies and silver cloth-of-gold worn by Princess Elizabeth and Anne of Cleves. The bejeweled crown that Mary wore for the procession was reported to be so heavy that she wearily propped up her head with her hands. 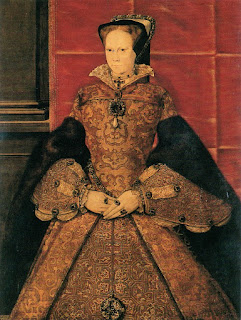 Crowds, pageants, and performers vied for Mary's attention as her procession slowly moved from the Tower to Westminster. Choirs of children sang as wine flowed from fountains. An acrobat even performed atop the weathervane of St Paul's Cathedral. After what must have been an exhausting day, Mary prepared for her coronation.
The next day was certainly one filled with both excitement and anxiety for this woman who had been at various times pampered and bastardized by a tempestuous father. Mary was not necessarily the showman that Henry VIII had been, so to be put on display before crowds would have been stressful, even without the knowledge that she was setting a historical precedent. Setting aside her shyness and timidity, Mary was determined that her coronation be held according to the customs of the kings who had come before her.

Mary wore crimson velvet robes and walked on blue fabric from the porch of Westminster Hall to the Abbey. Her auburn hair was worn loose in the style of a queen, but the orb, scepter, and crown of kingship were carried before her. Inside Westminster Abbey, swathes of cloth-of-gold hung from the choir to the altar and covered the grand chair upon which Mary was seated.

She was presented by the Bishop of Winchester:
"Sirs, here present is Mary, rightful and undoubted inheritrix by the laws of God and man to the crown and royal dignity of this realm of England, France and Ireland, whereupon you shall understand that this day is appointed by the peers of this land for the consecration, inunction and coronation of said most excellent Princess Mary; will you serve at this time, and give your wills and assent to the same."

Mary gave her offering and lay prostrate upon cloth-of-gold cushions as prayers were invoked above her. After a sermon by the Bishop of Chichester on the obedience owed to kings, Mary was prostrate again to swear her oaths as queen, followed by her anointing. Bishop Gardiner touched holy oil to Mary's forehead, temples, shoulders, and chest as she knelt wearing a sleeveless purple velvet corset. After the anointing, Mary was again regally dressed in a crimson velvet mantle and crimson cloth-of-gold slippers. 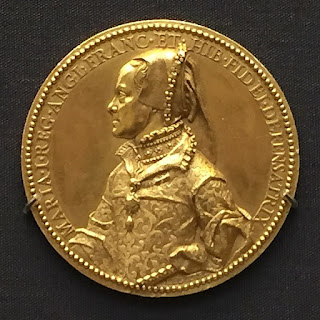 Gold coin featuring Queen Mary I, 1555
Trumpets announced the moment each of three crowns was placed upon Mary's head, and the choir sang Te Deum when the coronation ring was placed on her finger. She then received the sword and spurs that would have been presented to a crowned king and received the homage of her clergy and magnates. Finally, another offering was made, and Mary carried the orb and scepters (one traditionally the queen's and the other the king's) to her coronation feast.

She was Queen of England, but she had taken a long road to get there. Her mother's only child, Mary had been raised to believe she would be her father's heir. When Henry VIII broke with both Katherine of Aragon and the Catholic Church in order to disinherit Mary, she may have believed she would never see the throne. Through many trials and tribulations, which did not end once she was queen, Mary endured.
~~~~~~~~~~~~~~~~~~~~~~~~~
Get your copy of Queen of Martyrs! 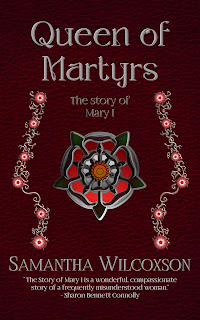