A Lady Merchant in the New World 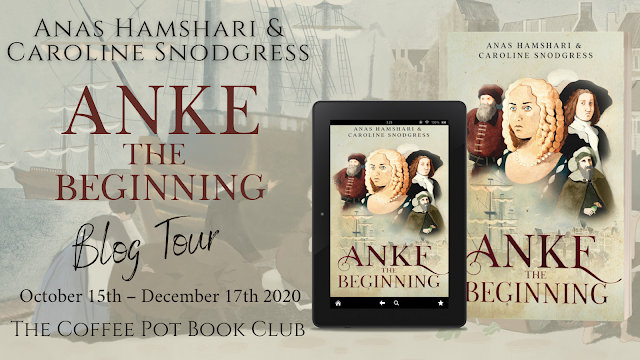 Participating in the Coffee Pot Book Club tours is such a great way to meet new authors and learn about parts of history I would have never discovered otherwise. My guests today have written a fascinating story about a Dutch female merchant who joins the adventurers embracing their future in the New World. Anas Hamshari and Caroline Snodgrass are here to discuss the history behind their story.

A Lady Merchant in the New World

A Guest Post by Anas Hamshari and Caroline Snodgrass

New Netherland, or Nieuw Nederland, as the Dutch called it, was first discovered by the Florentine explorer Giovanni da Verrazzano in 1524. At the time, Verrazzano was serving the French king, Francis I, as a navigator. It wasn’t until the first half of the 17th century when the Dutch East India Company hired Englishman Henry Hudson to find an easterly passage to Asia.

Hudson, having committed himself to two prior voyages in 1607 and 1608, intended to voyage eastward but his plans were disrupted by an ice-blocked path near the Arctic region.

Instead, Hudson sailed westward in the hopes of finding a westerly passage through the North American territories.

It was in this voyage that the Dutch had claimed territorial rights to the region, and by 1614, the Dutch explorer Hendrick Christiaensen had built Fort Nassau (due to the constant flooding of the fort every summer, by 1618, the Dutch colonists built a new fort nearby – Fort Orange), a fur-trading post in Albany, on the west bank of the Hudson River. The site had easy access to the ocean, which contributed to the success of the Dutch fur trade, while at the same time, sparked a rivalry (and later, conflict) with France, as well as England.

In 1621, the States-General (Staten-Generaal) granted a charter to the Dutch West India Company, (West-Indische Compagnie, a.k.a. GWC). The Company was founded by Willem Usselincx and Jesse de Forest so that they may continue the economic warfare against Spanish and Portuguese interests (colonies) in the West Indies (the Americas). Another essential reason for the GWC’s foundation was to eliminate in-house competition by Dutch merchants and to form a united association consisting of Dutch merchants and domestic (and foreign) investors.

The site where New Amsterdam was to be formed had originally been named (New) Nouvelle-Angouleme by the Florentine navigator Verrazzano. To protect the mouth of the Hudson River, the GWC built Fort Amsterdam. The fort also served as the center of GWC’s fur trade in the region; Peter Minuit, the Dutch governor at the time, sought to legitimize the founding of New Amsterdam but officially purchasing the land (now called Manhattan) from a local tribe in 1626. The land was controversially purchased for 60 guilders. The perpetrators of this deal were a group of Brooklyn natives, who had no right or claim over Manhattan, which in turn, infuriated the natives of Manhattan; they were powerless to do anything about it though.

During the early 1650s, New Amsterdam saw its first wave of refugees – Jewish migrants that escaped the aftermath of the Portuguese conquest of Recife, a Dutch colony on the Brazilian coast. While the Dutch governor at the time, Peter Stuyvesant, refused to receive those Jewish refugees, the GWC insisted that they stay. Many Jewish traders prospered from the fur trade as well; this provided us with the initiative to dig a little deeper and explore gender equality issues in that time and place.

As it turns out, Dutch women engaged in trade just as much as men did. Such women were called “she-merchants” or “lady-merchants”. This liberty was enjoyed by single, married, widowed, and spinsters. The Dutch legal system granted all manner of Dutch women the freedom to trade as they pleased, despite any obstruction that they may have encountered at the hands of the Dutch West India Company.

While the initial idea was to wholly portray a fictional life of Margaret Hardenbroeck, one of the wealthiest she-merchants of New Amsterdam at the time, Caroline and I decided somehow to deviate from Margaret’s original story and turn Anke’s story into a unique one that was greatly inspired by Margaret’s nonetheless. 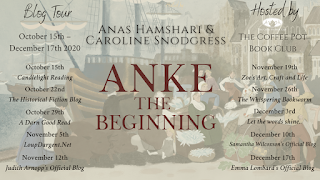 Anke: The Beginning starts off in the Belgian town of Mechelen, a once-upon-a-time bustling city that thrived from wool trade during the 15th century. By the end of the story, Anke and her brother Johan decide to migrate from Old Amsterdam all the way to New Amsterdam in New Netherland. No matter who you were, the New World provided endless, new opportunities to all the men and women of the Dutch Republic. The story ends with their ship bearing sight of Fort Amsterdam, leaving the readers (and ourselves) wondering about Anke’s new life in New Amsterdam, and the future that awaits her in that unspoiled part of the world.

Connect with the Authors of Anke:

Caroline Snodgress is a first-time author but a long-time writer and ghostwriter. As an Echols Scholar at the University of Virginia, she is planning to double major in English and History, and is thoroughly enjoying taking as many fiction writing classes as she can fit into her schedule. When not in Charlottesville, she lives with her family just outside of Richmond, reading eighteenth- and nineteenth-century literature and watching plenty of period dramas in her spare time. 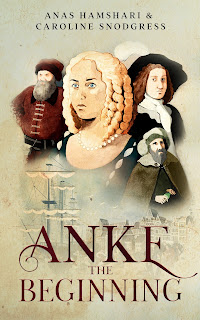 By Anas Hamshari and Caroline Snodgress

Living in the city of Mechelen, just south of once-prosperous Antwerp, in the aftermath of the Thirty Years’ War, Anke Verhaegen, an ambitious nineteen-year-old, is determined to make the most of her life.

When her brother Johan suggests crossing the Atlantic to New Netherland, Anke knows this is her destiny. Together, the two set about attempting to secure passage across the sea.
Before long, their plans are in motion, and hopes are high. Yet, with vengeful enemies, secrecy, and danger on the high sea waiting to be faced, will Anke really be able to secure a better life for herself?