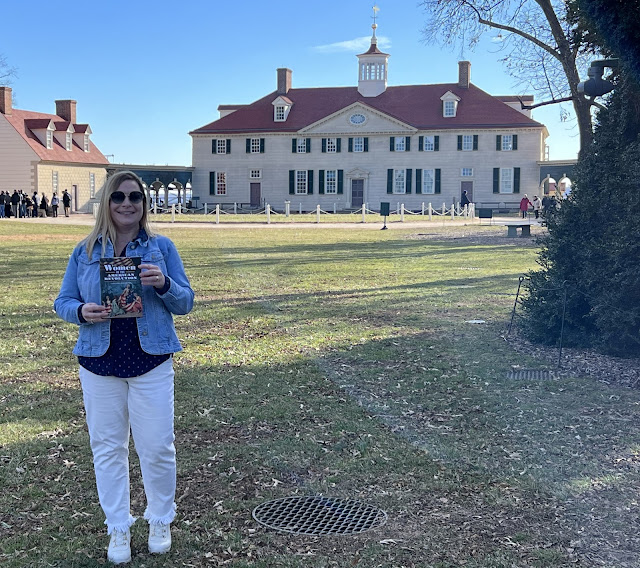 I recently made my fifth visit to Mount Vernon, the beloved home of George and Martha Washington. Each visit has included its own special element - a trip with my oldest son, one with my daughter, mint juleps just like George Washington used to drink, and the time I got to introduce my husband to one of my favorite places in the country. This time, I got to bring my book that includes my own little chapter about Martha Washington and her life spent mostly in this beautiful place. We also took an in-depth tour and got to see parts of the home that I hadn't seen before.

Scaffolding is often seen against one of the walls of Mount Vernon. This time, it was all along the portico facing the Potomac River, so the facade of the mansion was pristine. 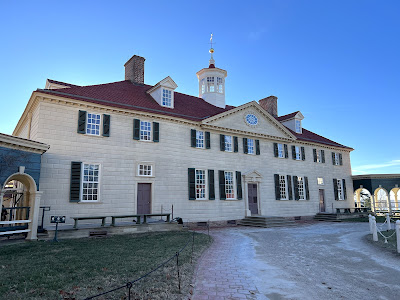 The exterior of the home is sided in wood planks that are painstakingly prepared to give the illusion of stone. A special paint blended with sand is used to create this effect, just as it was in the 18th century. The estate has been restored by the Mount Vernon Ladies' Association to appear as it did in 1799, the final year of George Washington's life, but this is not how it appeared when he first inherited it. For a great overview of the evolution of Mount Vernon and George Washington's passion for improving the home and grounds, visit Mount Vernon's website which makes a vast amount of information available to the public.

Inside, there is far too much for me to include in a single post, but the room the Washingtons were most proud of was the New Room that they built for entertaining in European style (they hoped, neither of the Washingtons ever traveled to Europe).

This room has a ceiling twice as high as any others in the home and was larger than the entire home of most other Virginians of Washington's time. Hints of George's love of farming and his belief in America's future as an agricultural nation are found all around, including this marble mantlepiece that was designed by him. 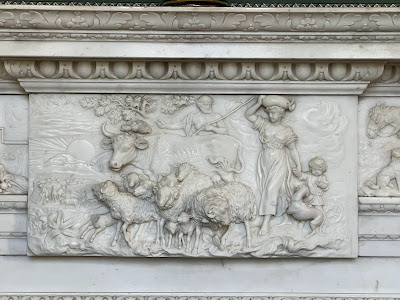 Other rooms that may be of particular interest to my readers include the Lafayette Room, where the Marquis de Lafeyette stayed while visiting the Washingtons. The portrait of the Marquis is a reproduction of one that George had commissioned to honor his friend. 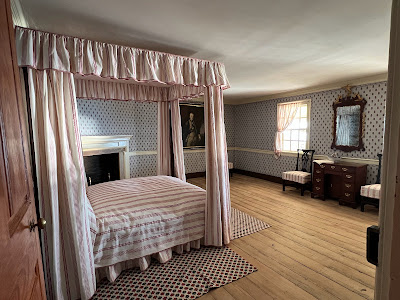 Another room that I mention in Women of the American Revolution is the third floor guest room where Martha moved to after George's death. She never again slept in the bed they had shared. 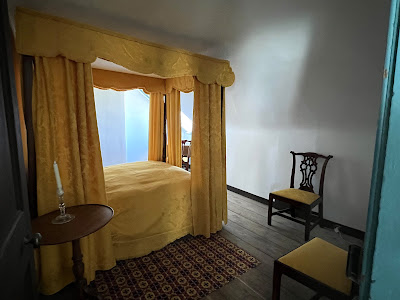 The Mount Vernon Ladies' Association has performed an astonishing amount of research to determine which guest bedroom Martha used, what paper was on the walls, and all sorts of other facts that we take for granted when we visit Mount Vernon today. The estate was in ruins when they purchased it in 1859.

I've discovered a fun fact connecting this to my current project on James Hamilton! 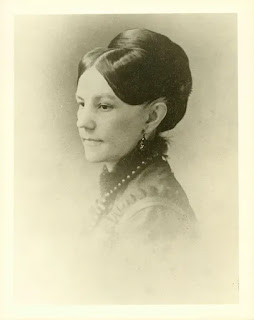 Mary Morris Hamilton, James's daughter, was the MVLA's first vice-regent for New York, and she raised about $40,000 of the estate's $200,000 purchase price. I can't wait to include more about her story in my next book! Needless to say, I have a greater appreciation for what these women went through than ever before.

I will share one more fun picture for those who are fans of the National Treasure movies. 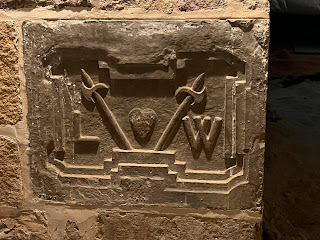 You may recognize this cornerstone as the entrance to a secret passage. (We were assured that it is not.) It is a cornerstone believed to have first been used by George's grandfather, Lawrence Washington, to establish the family in Virginia. Mount Vernon researchers believe the cornerstone was preserved and moved until it was eventually installed in the Mount Vernon cellars when George Washington had them built. The one currently in place is actually a replica, but the original is in the on-site museum, which you absolutely must visit if you ever take a trip to Mount Vernon.

I have so many photos and will be sharing more on Instagram. If you would like to learn more about Martha Washington and other amazing 18th century ladies, please consider my newest book, Women of the American Revolution. It is available at Pen & Sword, Amazon, Book Depository, Barnes & Noble, or your favorite book retailer. I appreciate your interest and support!

I also have a few other articles written about Martha here.

Join me on your preferred social media for daily fun facts, on this day in history posts, and lots of pictures!