The Death of Prince Edmund Tudor

Before the death of Prince Arthur gave us a history that includes Henry VIII. Long before that Henry went through six wives in his quest for a quiver of sons. Elizabeth of York and Henry VII lost their third son (sixth child), Edmund, when he was just over one year old.

By the time Edmund died on June 19th, 1500, Henry and Elizabeth had already lost one child, the Princess Elizabeth in 1495. Little Elizabeth, who I refer to as Eliza in Plantagenet Princess, Tudor Queen, was named for her maternal grandmother. Elizabeth Woodville died while her daughter was in confinement for little Eliza, so her death would have been particularly poignant. 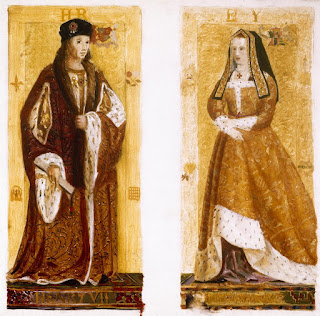 Edmund's death was no easier on the Tudor parents. They had traveled to Calais as London was plagued, once again, by the sweating sickness. Thinking that their children were safely tucked away with attentive nurses and servants in the English countryside, Henry and Elizabeth's greatest fear was likely for their eldest, Arthur, who may have already been showing signs of weakness caused by the tuberculosis that would kill him two years later.

In my book, the death of Edmund has a significant effect on Henry and Elizabeth's relationship, especially because it comes just months after Henry finally gave in to various pressures and ordered the executions of Edward of Warwick and Perkin Warbeck. Edward was Elizabeth's cousin and had been imprisoned for over half of his life.

Did his execution and Edmund's death drive a wedge between the previously happy Tudor couple? We can only guess, but you can read my take on events in Plantagenet Princess, Tudor Queen.
Posted by Samantha Wilcoxson at 8:27 AM