From Dyslexia to Writing Success: Guest Post by Henry Vyner-Brooks

Henry Vyner-Brooks is the author of The Heretic. '...A first class historical novel. This book is set at the time of the Reformation in the reign of King Henry VIII. It is actually difficult to classify as it has a little of everything - murder mystery, political intrigue, adolescent coming-of age, religion, high adventure, romance, medieval history. And it does each genre lightly and with a deft hand. I enjoyed it immensely. It was a long novel but a pleasure to pick up each time...' ~ Top Ranked Amazon Review

I am happy to welcome Henry to my blog today to discuss his journey to becoming a successful writer.

The Mystery of the Disappearing Dyslexic

I have a impish chuckle when reviewers write things like: 'Vyner-Brooks is a careful historian' or 'THE HERETIC is a serious historical novel'. Truth is; I'm no trained historian and no writer by nature either. I'm dyslexic, and couldn't read until I was 12! My high school English teacher wrote to my father asking for me to be removed from his class. “His essays are unmarkable."  (My Dad pointed out that 'unmarkable' was not correct English either, and I had to stick it out.)

I came to writing in my mid-thirties after ten years as a landscape architect and property developer. I was diagnosed with cancer - time was shaking me by the hand. On the day of my surgery I started writing a novel for my sons, expressing the deep things that I might never get to show them. And so grew my teen novels; THE WILL HOUSTON MYSTERIES, and so also did my family; a daughter and four sons. We live in house I built in the Lakeland mountains, complete with a field, a forest, a river, some chickens and goats... oh, and we home educate.

That meant I got an education too; I started to read history and philosophy, science, theology - I got hungry! I cultivated friendships with intellectuals; I read more stuff; I wrote academic papers on economics and education; I even spoke at Universities in the UK and abroad.... WHAT WAS HAPPENING? What had happened to a discouraged dyslexic kid? Who was this other guy; spouting big words and thinking big thoughts? I suppose that truth is I am both those people, the boy and the man. And I stubbornly cling to the belief that God is able to use even our inglorious pasts, our pain and failures, to make something beautiful - and useful  too.  I want my work to accessible at one level to struggling people, but also intense enough to stimulate and challenge clever people. It is a hard line to walk, but I learn to balance as I go.

GENRE SWAP: Enid Blyton to Hilary Mantel anyone?
The medieval writers never wrote novels, and would have seen our desire for novelty as beggarly, a sign of cultural decay. Writers like Langland, Gower and Marie de France deployed their considerable talent in retelling the worthy stories and merry jests of old. This in essence is what the history-lover comes to see too. It is what I, the teen-fiction writer came to see. There are stories out there, ones that haven't been told. Ones that need to be.

It was in 2010 that I first became aware of the mystery of St Benet's Abbey; the only monastery never dissolved by Henry VIII – think of it, the only one! It is situated on what sometimes becomes an island, linked to the mainland only by a causeway; all alone on the marshes. If a writer wanted possibilities for a location, here it was. We took a large yellow boat on the Norfolk Broads and enjoyed a magical week there one spring. And then while visiting nearby St Helen's church I heard about an artistic monk from the St Benets, Pacificus, who came daily in his coracle and with a  little dog to restore what is now the finest Rood screen in England. BAM. That had me, right there! I was hooked. I checked about thinking there would already be a novel about this place. To my amazement I found nothing.

Someone ought to do something, I thought. Maybe I should do it? But you write young adult fiction! So what?

THE HERETIC marked a genre shift and with it came the responsibility to write truthfully and authentically about both the era, and the people who lived in it. I was used to research (my teen fiction isn't exactly Enid Blyton) but even so, it took nearly three years to produce THE HERETIC, about six times longer than the other books I'd written. That takes serious dedication for everyone involved; writer, publisher, editors etc. I was very blessed to be assigned the author/editor Penelope Wilcock by the publisher; such a privilege to have someone with such experience calling you out to up your game.

WARNING: Intentional Reading Alert
The book is long and complex, reading the reviews has helped me understand that. Even though I have young people, multiple romance, murder, mystery, intrigue, adventure, it came up time and again in the reviews; this is a novel for people who enjoy history and not just a good story with historical window dressing. Yes, you can read it as a whodunit, romance and political thriller, that's fine at one level. But if you want to come to grips with the subtexts about philosophy, religion, power, freedom of conscience, then you are simply expected to know stuff already. I got this from Mantel's Wolf Hall. No laborious parentheticals telling you who Erasmus is! Of course, if some detail is instrumental to the plot then it must be explained; that is the writer/reader pact. But so much of our lives and environments are made up of textures and details that we do not understand, but nevertheless accept as real. I want to write a physical and intellectual world for my readers that is not necessarily explained for them, and yet if they wanted to reach out to examine a detail (say, Google some Latin comment, or reference a clothing detail) then they would find a real world waiting behind each line, each door.

Some readers allowed this approach to call them up a gear, but not all. And I don't blame the latter. Some readers need to relax and be entertained, that is valid. Their lives are tough enough without having to wade through a book that must be read 'intentionally'. But then again there are others who want that different level, and that is where I feel comfortable and gifted to write. I think there is an emerging market here. The runaway success of Wolf Hall proved it. Some people did want serious historical fiction; meaty, dense, deep, nuanced.

I don't think my first offering is all that, or on a par with Mantel's work, but I do think it is something to aim at for writers who want to do justice to the worthy and not-so-worthy stories that made our world. I am currently engaged on a prequel to THE HERETIC called ABSOLUTION, which deals with the rise of empiricism and rationalism in the High Renaissance Courts of Italy. It is dark, dense, juicy,and complex; with loads of real characters; the Borgias, Michelangelo, Leonardo, Raphael, poets, popes, philosophers, rogues. Sometimes I wonder how people will get on with it. I fret about it. But then I hear again, the voice of those medieval writers, 'your job is not to pander to novelty, or to play to the worse angels of our nature but to tell the worthy story faithfully and well.'
And quite frankly, that is a high enough calling for a dyslexic kid who couldn't read until he was twelve! 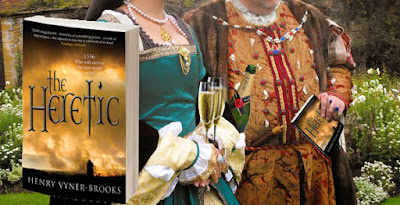 You can get your copy of The Heretic on Amazon US or Amazon UK. Connect with Henry on his website for more information on his writing and published works. 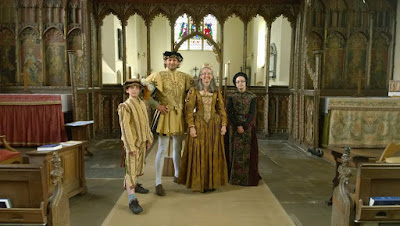 Posted by Samantha Wilcoxson at 10:02 AM