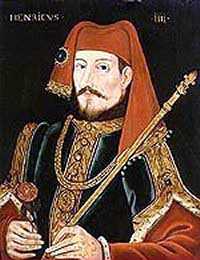 On September 30, 1399, the seed for the Wars of the Roses was planted. Though the first Lancastrian king came to the throne to high acclaim, it was this action that would eventually lead to the bloody battle between cousins when his grandson, Henry VI, proved inept. Arguing that Lancastrians should never have been kings in the first place, Richard Duke of York brought his own claim forward.

Long before that path of events could have been foreseen, Henry IV had to fight plenty of his own battles to defend his right to reign, even after convincing his cousin, Richard II, to abdicate. Rebellions against the usurper king kept him in an almost constant state of war, despite the fact that he did prove a better ruler than Richard had been.

The first challenge of his reign came quickly from the Welsh led by Owen Glendower in 1400. Allied with the Percys and Mortimers of England, who felt that Edmund Mortimer had a better claim to the throne than Henry. The Welsh were burdened by heavy taxes and revolted against his rule. They also received assistance from Charles VI of France, who was always eager for the opportunity to undermine the English.

The best known battle of rebellion against Henry IV was that led by another Henry. The Earl of Northumberland Henry Percy was known as Hotspur for his fury in battle. Though he had helped put Henry Bolingbroke on the throne, he became disillusioned with his rule and joined the rebellion as a strong and important ally. With the goal of placing Edmund Mortimer Earl of March on the throne in Henry's place, Hotspur's warrior zeal was brought against his king near Shrewsbury on July 21, 1403.

After surprisingly skilled assistance from his son, the future Henry V then a prince of almost 16 years of age, Henry IV proved victorious. Henry Percy was killed in the battle, leaving his troops to be slaughtered in retreat.

The new Earl of Northumberland, another Henry Percy, did not wait long to attempt to right the wrongs that he felt had taken place on that field near Shrewsbury. In 1405, he conspired with Thomas Mowbray Earl of Nottingham to remove Henry IV from power. They, too, were defeated, and Mowbray was executed while Percy went into exile.

Owen Glendower had increased his power in Wales but had not been successful in overthrowing Henry, and his allies were reducing in number with every battle. Henry was able to subdue the Welsh and drive the French from the country with the help of his warrior son. Prince Henry took on increasing duties as a soldier and in government as his father's health began to fail. 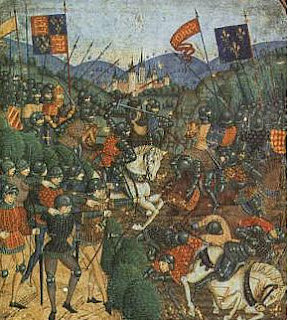 As Henry V, this infamous warrior took the war to the French with successes that had not been seen since his ancestor Richard I. If it weren't for the early death of Henry V, we may not have seen civil war erupt among cousins. As the epitome of medieval kingship, there were no whispers of the Lancastrian line being usurpers when Henry V was king. However, his son was only 9 months old when the burden of the crown was thrust upon him, and he never proved capable of carrying it.

The rebellion of Richard Duke of York with the support of Richard Earl of Salisbury was the result of Henry VI's poor rule. Though Richard himself would never wear the crown, two of his sons did, becoming Edward IV and Richard III in turn. The defeat of Richard III by Henry Tudor in 1485 was the final defeat between the Lancastrians and Yorks, leaving a Tudor on the throne and the Plantagenet dynasty at an end.
Posted by Samantha Wilcoxson at 9:39 AM