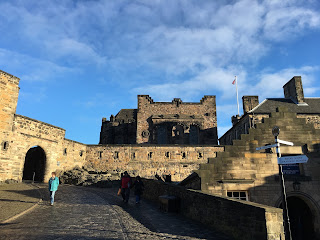 It has been a while since I wrote an installment in my Historic Places blog series, so I decided to revisit it today. Maybe I was avoiding talking about my next stop because there is so much to say that I know it cannot be adequately covered in one simple blog. Edinburgh has a greater variety of places to explore than anywhere else we visited on our recent UK trip along with a deep past to satisfy any history enthusiast.

Castle Rock in Edinburgh had already been the location of a fortress for hundreds of years before the building of Edinburgh Castle in the 12th century. It is easy to see why. When you walk along the ancient walls of the castle, you can see for miles in every direction. The panoramic views of the city are breathtaking. From this height, it is possible to discern the lines drawn between the medieval 'Old Town' and Georgian 'New Town'. 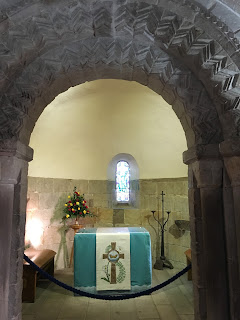 Old Town includes the castle, which protects within it's walls the Chapel of St Margaret, the oldest building in Edinburgh. This tiny stone chapel only holds about 20 people, but it is amazing to step inside and feel the weight of the many who have stood there before you. A stone archway separates the altar from the few wooden pews set upon a stone floor. It looks much as it must have in David I's time. When the castle was captured in 1314, the chapel was the only building left standing.

The remainder of the castle is a unique blend of elements that survive from the early 12th century to some that are startlingly new. The modern Scottish National War Memorial at the center of the castle joins the ghosts of the past to those who much more recently served in Scotland's troops. Much of the castle was restored during the Victorian era and that style is evident in many of the rooms with high ceilings and fireplaces that I could stand inside of. 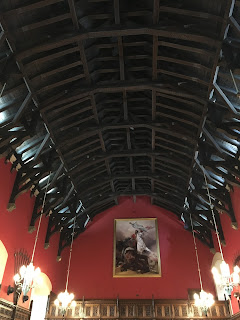 The great hall was one of my favorite parts of the castle because it was built during the era that I write about. I could imagine Elizabeth of York or Margaret Pole striding through similar rooms in glorious Tudor gowns. It was inspiring to spend time in accommodations that they would have found familiar.

Modern amenities such as afternoon tea and whisky tastings are now offered at the castle, and we were happy to take advantage of them before heading out to walk the 'Royal Mile' that separates Edinburgh Castle from Holyrood Palace. 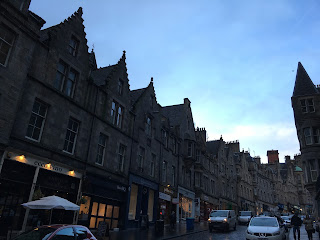 Walking the streets of Edinburgh, it is easy to see how JK Rowling was inspired to write Harry Potter. Gothic spires stretching out between (relatively) modern buildings does give one a sense that some sort of magic is taking place here. The cobblestone streets and fantastic blend of architecture give Edinburgh a style all its own. 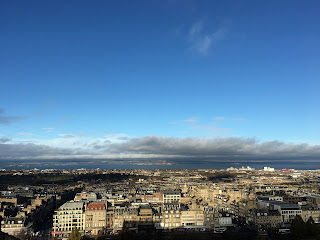 As the residence of the British monarch in Scotland, Holyrood Palace has been the setting of the drama of royalty since it was built in the 17th century. While the palace is in good repair and in current use, the attached abbey grounds are in ruin, giving the impression of the past slowly falling away. The abbey was founded by the same King David I who built St Margaret's Chapel. Holyrood was sacked in 1544, and the reformation ensured that the abbey was left to disintegrate while the palace was rebuilt.

Leaving the meandering streets of Old Town, one finds themselves upon the familiar grid of streets that make up Edinburgh's New Town. This was amusing to we American's who would normally consider the 18th century neighborhood rather old. In a style similar to that found in Bath, this portion of Edinburgh was carefully planned and designed for the neighborhood to become one cohesive unit, with one home almost indistinct from another. 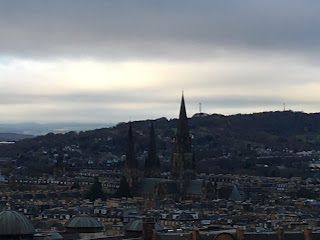 During our visit, a Christmas market was being held in Edinburgh, complete with ice skating, Ferris wheel, mulled wine booths, and many vendors work to explore. We enjoyed spending time here, and, of course, I discovered a book shop! We also found an antique map shop where we bought a gift for our geography-loving son. And I tried haggis....and liked it! 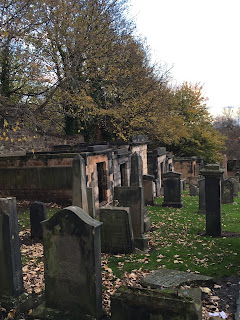 We spent hours simply wandering through Edinburgh, and it seems that there is something to see on every block. A quiet Victorian era graveyard was an inspiring discovery. Feeling like we were the only people in the world, we strolled past unique open style family crypts and worn and tumbled monuments. 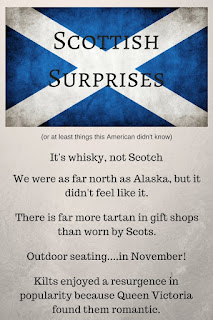 The nature of our trip meant that we saw many places but did not get to spend nearly as much time as we would like to in any of them. That is certainly true of Edinburgh, a city I hope to visit again someday.

Posted by Samantha Wilcoxson at 12:39 PM