The Persistence of the Past

Edoardo Albert is a talented writer of books and articles on diverse topics from Daily Science Fiction to History Today. He has previously been a guest here with a wonderful post on researching, writing and Northumbrian kings, and I am happy to welcome him back. Today, he takes us on a visit to Bamburgh Castle and the Isle of Anglesey, where he found a few physical connections to the long ago kings who feature in his novels.

Writing, as I do, about 7th-century Britain, you’d think that there would be few tangible remains for anyone interested in the doings of these seminal but all-but-forgotten kings to touch and see and visit. And seeing as how the Anglo-Saxons preferred wood for their buildings rather than stone, you’d be right – in the main. After the conversion of the Anglo-Saxons to Christianity – a process that I write about in my novels – there an increasing number of relics to see and appreciate, from the luminous beauty of the Lindisfarne Gospels to the churches of Saints Peter and Paul at Monkwearmouth, where the great Anglo-Saxon scholar Bede wrote the Ecclesiastical History of the English People, but there’s precious little from before and during the conversion period.

Which makes what there is, all the more precious.

Bamburgh – Bebbanburh then – was the stronghold and capital of the Idings, the Anglian rulers of Bernicia who, under Æthelfrith, took over the kingdom of Deira (centred on York). For anyone wishing to get close to the events in my books, there is no better place to visit. Bamburgh Castle as it stands today is the result of the renovations carried out in the 19th century by Lord Armstrong, Victorian industrialist and one of the richest men of the time. Personally, I prefer a castle intact, even if done up, rather than one in romantic ruins, so I’m pleased that Lord Armstrong rescued the castle from decay. But despite all the centuries of occupation, there are still traces of its days of glory as the centre of the most powerful kingdom in Britain.

To find the first of these, go down deep into the castle’s depths. There, in the basement, you’ll find the well. Sitting atop a huge great lump of dolerite, an extrusion of the Great Whin Sill, and set beside the sea, there was only one thing Bamburgh lacked to make it the perfect stronghold for a bunch of marauding Anglians on the make: water. Yes, you could store water in butts, but to withstand a siege, the castle needed water. So Æthelfrith dug a well. Through solid rock. Until he reached water. They dug down through 44 metres (144 feet) of rock, making a hole two metres (six feet) wide. How did they do it? We don’t know for certain, as they left no records of the engineering that went into this remarkable feat, but one possibility is that fires may have been set on top of the rock, heating it as much as possible, before cold water doused the fire, and cooled and contracted the rock, making it split. But they must have set a lot of fires to dig down so deep.

Also in Bamburgh Castle, in the small exhibit of finds from the ongoing excavations of the Bamburgh Research Project, there is an unprepossessing slab of corroded metal. It’s not much to look at: the remains of a broken sword retrieved from the earth after centuries buried. But this may be what is left of the most remarkable sword ever made. You see, in making a sword, smiths have to reconcile opposites. A sword must be sharp, to cut through armour and shield, bone and muscle, but it must also be flexible, so that it does not break in battle, leaving its wielder weaponless. Steel is hard and can be sharpened to a razor’s edge, but it is brittle. Iron is flexible but it will not hold an edge and so, in battle, will become little more than a metal club.

To overcome these contradictions, sword smiths of the so-called Dark Ages (they certainly weren’t ignorant so far as the properties of metals were concerned) developed the technique of pattern welding, where cores of iron were heated, wound together and beaten out, removing impurities, while a steel edge was welded to the blade. Up until the early 2000s, no blade had been found with more than four strands of iron welded together. And then the Bamburgh blade was sent for analysis to the Royal Armouries. It had six. Six iron cores, repeatedly heated and beaten and welded together. It would have taken thousands of man hours to create such a blade and only a master sword smith would have been capable of it. Such a sword would surely have been wielded by the greatest of warriors, perhaps the king himself. What is more, the sword was dated to the seventh century. The sword itself was passed down through the generations, sheathed in peace and wielded in war, for four centuries before, finally, it broke, and consigned to the earth in the grounds of Bamburgh Castle. Such a burial place suggests the esteem in which the sword was held.

Outside Bamburgh, the most evocative and moving seventh-century survival I have found is set into the wall of a quiet country church on the Isle of Anglesey. Anglesey, separated from the north west of Wales by the Menai Strait, was the bread basket of the kingdom of Gwynedd, one of the realms where the Britons maintained their life and their faith despite the incursions of the Anglo-Saxon invaders. The kings of Gwynedd had their seat at a settlement called Aberffraw. Visit the village today and it’s a quiet, peaceful place. A mile east of Aberffraw is the even quieter hamlet of Llangadwaladr and the church of St Cadwaladr. And embedded in the wall of the church is the gravestone of King Cadfan of Gwynedd, the father of King Cadwallon, the ‘furious stag’ of Welsh hope, who fought and almost brought down the Anglo-Saxon kings of Northumbria. Cadwallon himself, killed by Oswald in battle, has no gravestone but this mute stone gives testament to the learning of the ancient kingdom, for it is written in Latin: CATAMANUS REX SAPIENTISIMUS OPINATISIMUS OMNIUM REGUM (‘King Catamanus, the wisest, most illustrious of all kings’). Catamanus is the Latin form of Cadfan.

In the quiet of rural Wales, standing in the church dedicated to King Cadfan’s grandson, it seems almost possible to pierce the veil of centuries and see back to the grieving people and family who had this stone cut in memory of their king and father. 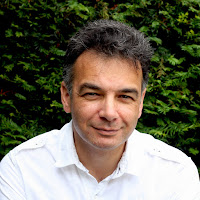 Connect with Edoardo on his website, where you can find more about his articles, podcast, and short stories. His books include the Northumbrian Thrones trilogy, featuring 7th century kings Edwin, Oswald, and Oswiu. He has also published several nonfiction books, including London: A Spiritual History, In Search of Alfred the Great, and Northumbria: The Lost Kingdom.

Find these and more by Edoardo Albert on Amazon.

Posted by Samantha Wilcoxson at 6:00 AM