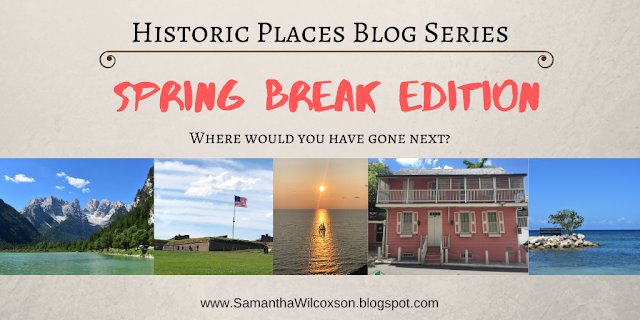 Charleston, South Carolina is possibly my favorite US city. It is beautiful, inviting, far enough south to be not-quite-tropical, and it is packed with interesting history. When we are discussing travel destinations, I like to choose places that I have never been before . . . unless Charleston is an option. I'm always ready to return.

Founded in 1670, Charleston is one of the oldest cities in the United States. One of the oldest homes in Charleston is built from Bermudian limestone and would fit right in on a tropical island. The Pink House, originally a tavern, was built shortly after the city's founding. Through its long history, The Pink House has been many things, including a law firm and an art gallery (when I visited), but it is in the process of being restored as a private residence. The 1,017sq-ft structure sold in 2017 for $620,000.

It is an unavoidable truth that the initial growth and success of Charleston was based on the slave trade. A significant number of the slaves brought to the US first landed in Charleston, and the Old Slave Market still stands as testimony to this violent past. The museum has few artifacts from the structure's time as a slave market, one of the last operating in South Carolina, but there are many informative displays.

A brighter remnant of the past is Charleston's famous Rainbow Row. On what was once a waterfront street, a line of colorful Colonial era homes create a postcard perfect scene. The area deteriorated severely in the wake of the Civil War, but restoration efforts began in the 1920s and have made Rainbow Row a widely recognized Charleston landmark.

Over the years, Charleston has endured earthquakes, smallpox and malaria epidemics, hurricanes, and war. Yet it not only remains standing, it is widely considered the best place in America to live. It would be impossible to cover the vast history of Charleston in one post, so we will look at just one more location that can't be missed if you visit this charming city.

Fort Sumter is a ferry ride away, and, especially if you enjoy studying the Civil War, you won't want to miss it. The ride through Charleston Harbor is relaxing under the South Carolina sun, and it gives you a great perspective of how it would have felt to live in town when those first shots were fired on April 12, 1861. Now a National Monument, the fort was originally built when the War of 1812 exposed America's coastal weaknesses, but it was not complete when the Civil War's opening shots were fired. It was manned by a single lighthouse keeper before 1860. The bombardment of Fort Sumter during the Civil War left it in ruins far more devastated than what visitors see today.

Wooden sections had been set aflame with heated cannonballs, and masonry was left crumbling. Rebuilding was carried out in response to the Spanish-American War and World Wars I & II. Now that the site serves as a historic monument rather than active defense fort, areas have been restored to how they would have appeared in the 1860s. Some authentic reminders of the Civil War bombardment remain, such as shells embedded in the walls.

Other Charleston hotspots include the Historic Charleston City Market, Patriot's Point, the city's many beautiful historic churches, and astounding plantation homes. When you're there, don't miss your chance to take a horse drawn carriage tour down the cobblestone streets to get you in an appropriately historic state of mind. Charleston has the ocean, good Southern comfort food, art, natural beauty, and history. You will want to go more than once, too.