Does Mrs. Astor know you? In the latter half of 19th century New York City if the answer was no, the most coveted invitations would have been beyond your grasp. You had a 5th Avenue address? You were first to wear the latest Worth gowns? Your husband could buy half of Manhattan with plenty of money left over to build your Newport cottage? You hobnobbed with European nobility and royalty? If you were – gasp – New Money, none of your family’s accomplishments, regardless of how well earned, mattered.

19th century New York’s well-to-do were basically divided into two groups: Nobs and Swells. Nobs were old New York, often referred to as Knickerbockers. They lived quietly. Their homes surrounded Washington Square Park and lined the best locations along lower 5th Ave. The husbands earned their livings as bankers and from real estate. A girl’s debut meant a white dress with a few friends to tea at home. When she found the right young man, their engagement party or dinner and the wedding all took place at home witnessed by the young couple’s most intimate friends. Life among the Nobs was calm, quiet, subdued, and above all else, eschewed ostentation.

Swells were polar opposites. The husbands were captains of industry. Ostentation appeared to be the guiding principle in all they did. Whether it was building a new mansion farther north on 5th, importing the grandest artwork and furniture from Europe, or buying the best Worth gowns, the bigger and louder the display, the better. Nobs naturally viewed Swells as social climbing arrivistes who were crude, uncouth, and tacky. The Nob husbands might do business with the robber barons, but the wives would have nothing to do with the new money people, and as everyone knows, women are generally the arbiters of society.

For Swells with daughters of marriageable age, the situation was dire indeed. Their beautiful, well-educated, accomplished girls had little-to-no chance of being introduced to, much less marrying, New York’s most desirable, socially prominent young men. What was an ambitious mother to do? Enter the Buccaneers, whose mamas cast their gazes east toward much greater prizes than even Mrs. Astor could command.

Edith Wharton, the novelist and chronicler of Gilded Age manners, grew up among the elite of old New York and knew them well. She also knew the daughters of those déclassé new money arrivistes, fictional versions of which she incorporated in her last, unfinished novel, The Buccaneers. She dubbed these girls with rich papas and socially ambitious mamas, but who lacked pedigree, thus. One must suppose she chose the nickname due to the effect they created among the targets of their parents' social-climbing efforts, the English aristocracy.

It has been said that these American heiresses presented a significant, alluring contrast to their English counterparts and it was not just their papas' money. The daughters of wealthy Americans were well-educated and reared to be confident in themselves, their abilities, and their opinions. Their mothers, reared in the spirit of the pioneers, set examples of strong-willed, accomplished wives to whom their husbands bowed in all things domestic. The daughters were cossetted and adored by their fathers; their English counterparts were basically treated as lesser members of the household and something of a liability until they married. The daughters of America's robber barons tended to be vivacious and outgoing. In other words, they were often the life of the party in an otherwise stuffy, rigid society. In the eyes of some Englishmen, including the Prince of Wales, they were a refreshing breeze blown in on the Atlantic Drift.

Between 1870 and 1902, no fewer than 102 American girls married into the English peerage. While American heiresses had been marrying abroad for many years, none had reached the epitome of the English social order until 1876 when Consuelo Yznaga married George, Viscount Mandeville, the future 8th Duke of Manchester.

Consuelo was born in 1853 in New York City to Antonio Yzanga del Valle, a Cuban diplomat and of the landed Cuban gentry, and Ellen Maria Clement of Ravenswood Plantation, Concordia Parish, Louisiana. The Yzanga family owned plantations and sugar mills in Cuba, a home in New York, and a large home in New Port while the Clement family was originally from stalwart New England stock. Between them, Consuelo's parents were rich, owned large tracts of land in the US and Cuba, and were connected to the Spanish aristocracy, but this was not enough to gain their beautiful, accomplished daughter invitations to the best balls and dinners. Mrs. Astor did not "know" them; therefore, they were beyond the pale. To make matters worse, Mrs. Yzanaga was considered "fast" by the people who counted.

Shunned by New York society, in the 1860's Mama Ellen decamped for the much brighter and more accepting society of Paris where her three daughters made quite a splash. They became favorites at the court of Napolean III's Empress Eugénie. The empress had no illusions when it came to maintaining a glittering court. Social standing was far less important than sparkling personalities, charm, wit, and plenty of money. Her court was peopled by those who could afford new dresses for every occasion and lots of diamonds. The Yzanaga girls suited very nicely and were seen often at the Tuileries attending State Balls and musicales. Only thirteen, Consuelo knew the empress well and became friends with Alva Smith, the future Mrs. Vanderbilt.

In 1875, the Yzanaga women joined the social whirl in Saratoga Springs, NY. Where life had much more to do with seeing and being seen than any health concerns the mineral waters might address. Suitable young men came for the horse races and to observe the young ladies promenading along the United States Hotel piazza and attending the weekly balls all under the strict eyes of mothers and chaperones. The now 22 year-old Consuelo drew the notice of many of the young men, but one young man in particular drew that of Mama Ellen.

At 23, George Drogo "Kim" Montagu, Lord Mandeville, had already seen something of life beyond the walls of his family's country seat, Kimbolton Castle. He had served as ADC to Sir Garnet Wolseley in the Zulu War. While in Saratoga, he suffered an attack of a recurring malady thought to be a fever picked up in Africa and Mama Ellen saw an opportunity. She invited him to recuperate at the Yzanaga family cottage in Orange, New Jersey. Consuelo and her mother acted as his nurses, giving them exclusive access the most eligible bachelor. His positive qualities included being charming, being friends with the Prince of Wales, being the future 8th Duke of Manchester, and having developed an attraction to Consuelo. On the down side, he gambled on games of chances and the horses and was in need of cash. That last negative became a positive when Papa Yzanaga offered a £200,000 (approximately $6 million today) dowry. Consuelo accepted his proposal and a wedding date was set. The 7th Duke and Duchess of Manchester were furious, but the couple were wed in New York's Grace Church in 1876.

The wedding party was greeted by newspapers and a cheering public as the event of the season. New Yorkers were excited by and proud of the hometown girl who was now a duchess. London was equally as charmed by Consuelo. The Duke of Portland described her entry into the London season as a success, saying, "[she] took society completely by storm by her beauty, wit, and vivacity and it was soon at her very pretty feet."

Consuelo blazed the trail for the American heiresses that would come after her. These “dollar princesses,” as they became known, would bring millions to their aristocratic husbands, saving many noble English estates from ruin and allowing their parents back home in the States a step up on the Nobs and Mrs. Astor who shunned them. After all, “have you met my daughter, the countess…marchioness…duchess” definitely has a certain cashé, does it not? 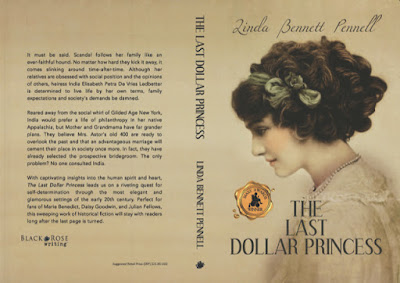 It must be said. Scandal follows her family like a faithful hound. No matter how hard they kick it away, it comes slinking around to insinuate itself into their lives again. Although her family is obsessed with social position, one thing is certain. Heiress India Elisabeth Petra De Vries Ledbetter is an outlier among her kin. She is determined to set her own course, family expectations and society's demands be damned.

Reared away from the social whirl of Gilded Age New York, India would prefer a life of philanthropy in her native Appalachia, but Mother and Grandmama have far grander plans. They believe Mrs. Astor’s old 400 are ready to overlook the past and that an advantageous marriage will cement their place in society once more. In fact, they have already selected the prospective bridegroom. The only problem? No one consulted India.

With captivating insights into the human spirit and heart, The Last Dollar Princess leads us on a riveting quest for self-determination through the most elegant and glamorous settings of the early 20th century. Perfect for fans of Marie Benedict, Daisy Goodwin, and Julian Fellows, this sweeping work of historical fiction will stay with readers long after the last page is turned.

The Last Dollar Princess is available now on Amazon! 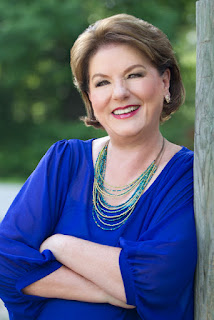 I have been in love with the past for as long as I can remember. Anything with a history, whether shabby or majestic, recent or ancient, instantly draws me in. I suppose it comes from being part of a large extended family that spanned several generations. Long summer afternoons on my grandmother's porch or winter evenings gathered around her fireplace were filled with stories both entertaining and poignant. Of course, being set in the American South, those stories were also peopled by some very interesting characters, some of whom have found their way into my work.

As for my venture in writing, it has allowed me to reinvent myself. We humans are truly multifaceted creatures, but we tend to sort and categorize each other into neat, easily understood packages that rarely reveal the whole person. Perhaps you, too, want to step out of the box in which you find yourself. I encourage you to look at the possibilities and imagine. Be filled with childlike wonder in your mental wanderings. Envision what might be, not simply what is. Let us never forget, all good fiction begins when someone says to herself or himself, "Let's pretend."

I reside in the Houston area with one sweet husband and one adorable, sweet Labradoodle who is quite certain she’s a little girl.

"History is filled with the sound of silken slippers going downstairs and wooden shoes coming up." Voltaire