Not My White Princess 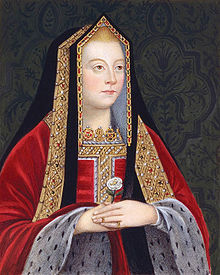 The popularity of the Starz series The White Princess has raised some questions about the historical Elizabeth of York. Based upon a book by Philippa Gregory, this show would have people believe that "Lizzie" was a fiery character who plots against her own husband.

I have no idea where any of this comes from.

Elizabeth of York is, of course, near and dear to my heart. One of the reasons that I wrote about her was that she seemed to be a forgotten, yet vital, part of history. I wanted to shed some light upon her life and character, but I have to admit that this wasn't exactly the type of attention I was hoping she would get. The real white princess would not recognize herself in this production.

The real Elizabeth was pious, generous, and devoted to her husband. History remains silent on what Elizabeth's feelings were toward Henry Tudor before their marriage, but she would have seen it as her duty to build a good relationship with him. Their daily habits indicate that they were devoted to each other, often travelling together and spending more time together than many royal couples.

For an idea of what a day in the life of Elizabeth looked like, see this article that I wrote for Tudor Times. 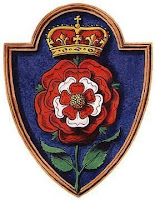 Elizabeth had grown up during turbulent times. She went into sanctuary with her mother and sisters once when her father, Edward IV, was forced into exile by the forces of his cousin and one time ally, the Earl of Warwick, and again when her father died. She had watched the power struggle between her father and Henry VI, Warwick, and Margaret of Anjou. She had been there when her uncle became Richard III and her brothers disappeared. The last thing Elizabeth wanted to do was start it all up again. She and Henry strove for peace with their union and for the most part achieved it.

Did Henry and Elizabeth have marital ups and downs? Certainly. Who doesn't? They had the added stress of minor rebellions and pretenders claiming to be Elizabeth's brothers, so I think they kept their relationship together rather well. They are both noted for their faithfulness during a time when monogamy was not expected of men, and certainly not of kings. Frankly, to suggest anything else is disrespectful of their relationship.

If you are watching The White Princess for light entertainment, enjoy. Just remember that behind the Hollywood story there is a real historical couple whose truth is just as interesting as fiction.
Posted by Samantha Wilcoxson at 5:00 AM