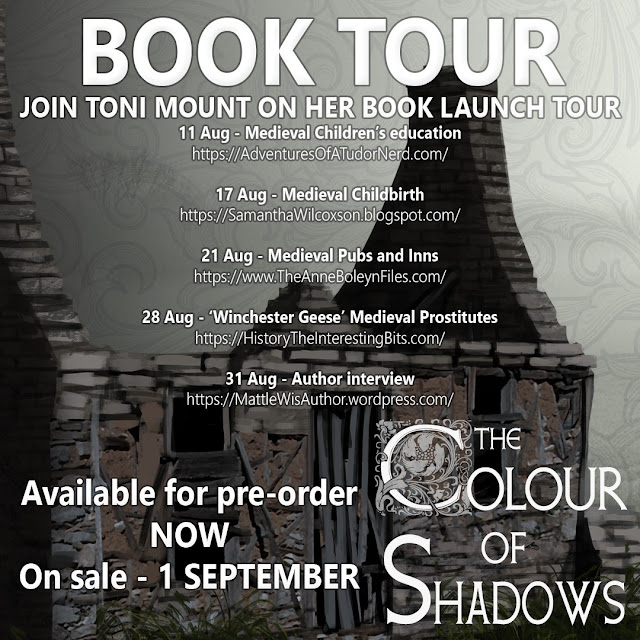 Toni Mount joins us today as part of her blog tour celebrating the publication of her latest medieval mystery, The Colour of Shadows. If you love Sebastian Foxley as much as I do, you won't want to miss it! If you haven't tried this series, I couldn't recommend it more highly - get started with The Colour of Poison. Toni's knowledge of the 15th century shines marvelously in this novel, and she has kindly shared some in depth expertise on what women endured to bear children during the medieval and Tudor times.
You can read my full review of The Colour of Shadows on Goodreads.
Join me in warmly welcoming Toni Mount to the blog today!
~ Samantha
~~~~~~~~~~~~~~~~~~~~~~~~~~~~~~~~~~~~~~ 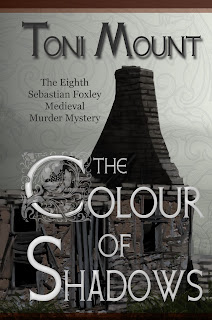 In my new Sebastian Foxley murder-mystery novel The Colour of Shadows, set in medieval London, Seb’s wife, Emily, is approaching the time of her second confinement. But what were the likely experiences of a mother-to-be in the fifteenth and sixteenth centuries?

As the time of her delivery approached, the pregnant woman of the Medieval and Tudor eras had much to do to prepare for the big event. Some felt trepidation and fear for we know that, during the reign of King James I, Elizabeth Joceline not only stitched the swaddling bands for the coming baby but sewed a shroud for herself as well – sadly, this was required nine days after the birth of a daughter in October 1622. It is certain that Elizabeth was not alone in feeling so pessimistic; perhaps she was even continuing a Tudor tradition.

Today, childbirth is seen as a case of medical intervention but in the fifteenth and sixteenth centuries, male physicians and surgeons avoided the female-only occasion that centred on supporting the mother-to-be through her labour, as well as the days before and after the birth. This time in a woman’s life was called a ‘confinement’ for good reason as she kept to her chamber, away from society; a virtual prisoner of her condition. Royal and noble women ‘took to their chambers’ as early as four to six weeks before the baby was due for a period of rest and quiet, to build up their strength for the coming ordeal and to prepare their souls in case the worse should happen. This lengthy time of retirement was a means of demonstrating the families’ wealth and status as it meant the women no longer carried out any domestic duties, but it was also a precautionary measure because it was difficult to determine the exact date of conception. Even if that was known, the precise term of a pregnancy wasn’t understood and thought to be variable, so it was impossible to know the due date.
During troubled times for the House of York, on All Souls’ Day, 2 November 1470, Queen Elizabeth Woodville, wife of the exiled King Edward IV, gave birth to Prince Edward while she was in sanctuary in the Abbot’s House at Westminster Abbey. She had expected to give birth in the splendid lying-in chambers ready prepared for her at the Tower of London, but when the tables turned against her husband, she was forced to flee these sumptuous comforts with her mother and daughter to Westminster Abbey. In spite of the Earl of Warwick’s – then Regent of England – personal animosity towards the queen and her Woodville relatives, he wasn’t cruel to Elizabeth and he sent Lady Scrope and others to assist her in her delivery in addition to paying their fees.
Anne Boleyn’s childbed chamber at Greenwich was redecorated, almost rebuilt with a false ceiling installed, tapestries hung and a special cupboard made on which to display her gold and silver plate to impress any (female) visitors. Those who attended her as steward, butler, carver, etc. were all women appointed for the duration, taking on these male roles. King Henry VIII is mentioned as her only male visitor during her tedious wait but whether any priests were allowed to attend her, I haven’t been able to discover. We know midwives were permitted to baptise the baby, if it was thought unlikely to live until the christening proper. The Ordinances and Regulations for the Royal Household*, drawn up in the previous reign by Henry VII, seem to have still been current by the time of Anne’s lying-in and they say the queen should attend divine service before retiring but make no mention of any provision for religious observance after that until her ‘churching’ when she returned to society.
Of course, women of lesser status and affluence could not afford to withdraw in this way and probably worked until the labour pains began, if they were well enough and able to do so. Once it was certain labour had begun, men were banned from entering the chamber where the women took charge. I imagine that in the case of those who lived in single-room cottages, this meant the husband went off to the tavern to eat and drink with his friends. Labour might last up to two or three days and the longer it went on, the less likely a successful outcome for both mother and child became.
After the birth, the new mother remained in bed for three days with the room kept in darkness because they believed labour made her eyes weak. On the third day, ‘upsitting’ was allowed. This was again a female only occasion but meant the woman could get out of bed but was still confined to her chamber. A special meal was served and the baby shown off in its christening robe. The famous painting of the Cholmondeley Ladies [pro. Chumlee] commissioned from an anonymous artist c.1600-1610, probably shows this event. The Cholmondeley sisters, Lettice and Mary, were twins who married on the same day and gave birth on the same day. 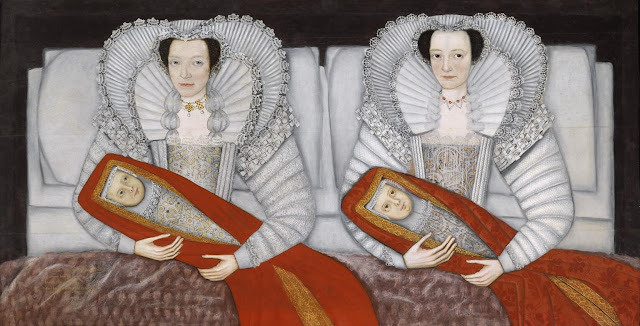 The painting shows them in all their Elizabethan finery, holding their swaddled babies swathed in crimson christening robes. [The Colmondeley Ladies, Tate Gallery, London. http://www.tate.org.uk/art/artworks/british-school-17th-century-the-cholmondeley-ladies-t00069 ]
The next stage of the confinement, about a week later, allowed the woman to leave the chamber but she still couldn’t go outside the house nor have male visitors other than her husband. After a month or so, her face veiled, she would finally be escorted to church by her women friends to be ‘churched’. This was a brief service in which Psalm 121 would be read, the Lord’s Prayer recited and the woman gave an offering to the church in thanks for her safe delivery. The Church regarded this as a simple thanksgiving ceremony but many thought of it as a woman’s purification after the ‘unclean’ act of childbirth – a fact which upset some Protestants as being a papist idea. Later, the Puritans were even more scathing, seeing childbirth as a natural event in a woman’s life for which she required no purification, while the greedy Church took money from women who perhaps couldn’t afford it, at a time when they most needed every penny.
As with the withdrawal before the birth, many poorer women with husbands and older children to care for couldn’t wait a month or more before returning to normal life. Church records show that for ordinary parishioners the time between a baby’s baptism and its mother’s churching varied from eight days to nearly fifty days, with the usual gap being just under two weeks. The longest gaps may have been due to the woman being ill after the birth and taking weeks to recover. Whatever the case, her confinement over, it was back to work as usual for the Medieval and Tudor housewife but, if things had gone well, there was now a new baby to add to her tasks and another mouth to feed so, as Thomas Tusser pointed out: ‘a housewife’s affairs have never an end’.
*https://books.google.com.au/books?id=Q25HAAAAcAAJ&pg=PR1&lpg=PR1&dq=Ordinances+and+Regulations+for+the+royal+household+society+of+antiquaries&source
Get your copy of The Colour of Shadows 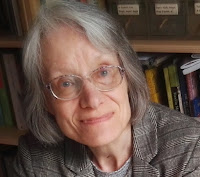 I'm an author, a history teacher, an experienced speaker - and an enthusiastic life-long-learner. I'm a member of the Research Committee of the Richard III Society and a library volunteer where I lead a Creative Writing group. I regularly give talks to groups and societies and attend history events as a costumed interpreter. I write for a variety of history magazines and have created seven online courses for www.MedievalCourses.com.
I earned my Masters Degree by Research from the University of Kent in 2009 through study of a medieval medical manuscript held at the Wellcome Library in London. My BA (with First-class Honours), my Diploma in Literature and Creative Writing and my Diploma in European Humanities are from the Open University. My Cert. Ed (in Post-Compulsory Education and Training) is from the University of Greenwich.
Connect with Toni on her website, Facebook, or Twitter. You can also learn more about the Sebastian Foxley series or Toni's works on Medieval England and Medieval Medicine.
Get your copy of The Colour of Shadows
Posted by Samantha Wilcoxson at 12:00 AM