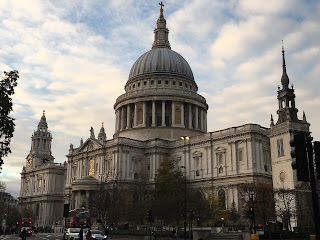 The next stop in the Historical Places blog series is St. Paul's Cathedral. A pleasant walk along the Thames from our previous stop, Big Ben and Westminster, will take us to Christopher Wren's most famous creation. St. Paul's is a rather modern design compared to other cathedrals in England. This is due to the fact that, like much of London, it was rebuilt after the Great Fire of London in 1666.

The history of St. Paul's Cathedral goes back much further, finding its roots in the Christian movements of the early middle ages. The highest point in the city was chosen as the location for the center of Christianity in London in 604. A substantial structure was not built until somewhat later, after the fear of destruction from invading Danes had abated.

The ascendancy of William the Conqueror saw an explosion of new stone construction in England. A cathedral for St. Paul's was part of the Norman's building plan. Developed over the course of decades, a stunning medieval church rose to tower over the central city of the land. This structure defined the London skyline for centuries.

During the religious turmoil of the Tudor era, St. Paul's remained an important part of Londoner's worship, adjusting to the required services of the time as required. In 1561, the church's spire was struck by lightening and collapsed. Those alive at the time may have wondered if this was God's judgement upon the English wavering over reform versus tradition in religion. Whichever was their preference, the spire was never repaired.

Just over a century later, the entire cathedral was destroyed in the 1666 fire that destroyed much of medieval London. To avoid another disaster like this from occurring again, building restrictions were developed. Thatched roofs had been banned within London city limits since an earlier fire in 1212, but the Rebuilding of London Act of 1666 was more comprehensive. Everything from width of streets, height of buildings, and materials used for construction was considered in the creation of this act. Construction needed to be safe and sanitary but also had to occur quickly for the city to be up and running once again. 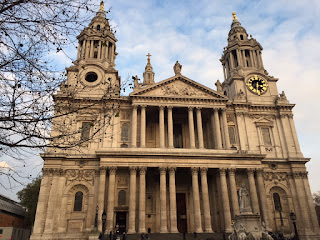 Famous architect Christopher Wren presented his plan for a new London which was designed to create a beautiful, classical city modeled on the Garden of Versailles. Although his city plan was too elaborate and expensive to be chosen by city leaders, Wren was given the vital task of rebuilding St. Paul's Cathedral. It is his design that we see when we visit St. Paul's today.

The cathedral stands out due to its baroque style architecture which involves curves and columns replacing the straight lines of medieval structures. The most recognizable of these features is the prominent dome that enables visitors to easily identify St. Paul's. It is one of the largest cathedrals in the UK, second only to the Liverpool Cathedral completed in 1978.

Since we visited St. Paul's during worship service, I did not take photos of the interior. It was wonderful to hear the choir voices resonating throughout this beautiful church, and one could spend hours appreciating the intricate details of design throughout each functional area of the cathedral. In the lower level, visitors can enjoy tea at the cafe or select a souvenir from the gift shop. It is up to you to decide what you think of these amenities being located in the crypt. Apparently enough Londoners appreciate the venue because it is even available to be rented out for parties and receptions.
Posted by Samantha Wilcoxson at 1:12 PM