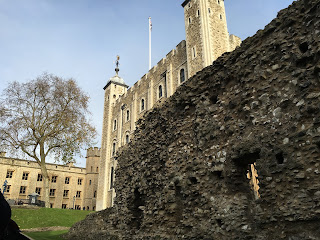 My readers are probably not surprised to hear that the Tower was my most anticipated stop while we were in London. So much history has been witnessed by these stone walls that I wish I could hear them whisper their story. The Tower is a significant setting in my most recent novel as the place where Elizabeth's brothers disappear and she dies after delivering her last child.

If you have not visited the Tower or other castles, you may not realize that the setting is much more like an enclosed village than a single tower. Our romanticized vision of a castle more closely resembles a standard castle keep than the entire complex. 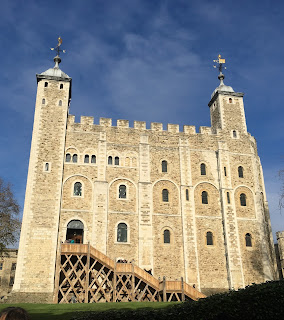 As you can see from the first picture, some of the stone shows its age more than others. The famous White Tower, built by William the Conqueror from stone that he had transported from Normandy looks amazing for being almost a millennium old. The White Tower is the central stone keep of the fortress, built by the first of England's Norman kings to establish his dominance in the capital of his new kingdom. The rest of the castle grounds would grow up around this impressive, white-washed stronghold. Through the centuries since William's 1066 invasion, this tower has served primarily as a stronghold but also as a prison and storage facility.

The White Tower was an archaeological wonder of its day at a height of 90' with walls that are 25' thick at their base.

Plantagenet kings of medieval times continued to increase the sprawling fortress' size and uses. The 12th-14th centuries saw the Tower of London become much of the structure that is seen today surrounding the White Tower. During the reign of Edward I, the Tower was recognized as an ideally secure place to store jewels, records, and the royal mint. 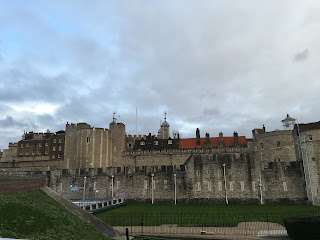 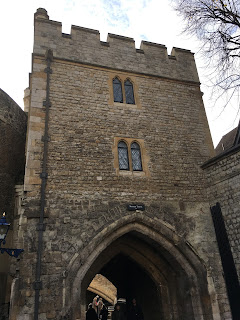 Though the castle is known as the Tower of London, it is truly made up of several towers, which may lead to some confusion. We have already discussed the original White Tower which stands at the center of the castles concentric design. Smaller towers surround it, including the Beauchamp Tower, famous for housing Tudor era criminals. The Bloody Tower is a relatively small tower where the sons of Edward IV were staying when they famously disappeared...were murdered? That's a discussion for another day. 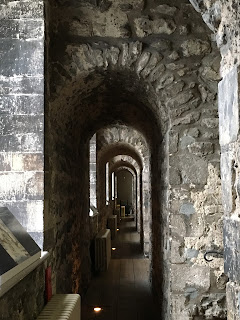 Inside any of these towers, you can feel the atmosphere of history prickling at your senses. I could not resist running my fingers along the stone walls within the narrow staircases, hoping that I just might find a spot that Elizabeth's hand touched over 500 years ago. Admittedly, the feeling is somewhat reduced by the rather modern radiators that give the structure warmth while the large fireplaces lie dormant, but I did not mind as much that there were wooden stairs outside to save me from climbing a ladder.

Strolling through the Tower Green, the architecture and beauty of the place can almost make one forget that the grass has been fed with much blood. It is a beautiful setting filled with smiling tourists and friendly Yeoman Warders. 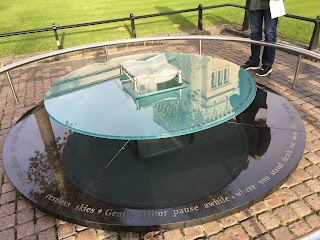 Within the ring made up by these and several other towers, visitors could easily walk by the Execution Site without realizing what it is. Memorializing multiple political prisoners of the crown, the spot is now home to a frosted glass and granite monument in place of the bloody scaffold. At this site, three of England's queens were beheaded. Each has their name etched into the edge of the glass: Anne Boleyn, Catherine Howard, and Jane Grey. Others who had their last view of the Tower from this spot include Margaret Pole, William Lord Hastings, Jane Boleyn, and Robert Devereux. Each of these deaths demonstrate just how quickly fortune's wheel could turn in the 15th and 16th centuries. 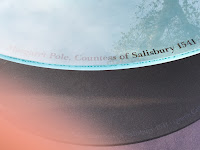 Thankfully, Henry VIII did more than execute people at the Tower, though he did plenty of that. To walk through the Tower gift shop, one would think that he was the only king England had ever had, but I digress. 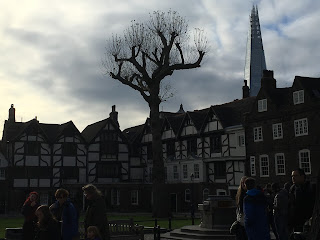 Henry enjoyed building projects almost as much as the hunt for a new wife. His contribution to the Tower grounds, besides noble blood, includes the timber structure - very recognizable as Tudor era - that was designed as a royal residence for Anne Boleyn.

One of the most popular exhibits at the Tower is the Crown Jewels. This includes an education on the English Civil War of the 17th century, a time when the crown jewels were melted down and torn apart. Sometimes for their value, sometimes out of spite. There is a vast amount of elaborate jewelry and accessories to be viewed, but they cannot be photographed. 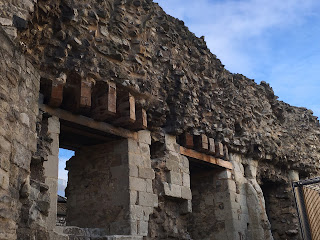 The 19th century saw the Tower's evolution from a practical fortress to a historical monument. With the moat drained and the mint removed to another location, the Tower began to enjoy a peaceful retirement. It was not completely out of commission until after Britain's involvement in the World Wars. The last executions to take place on Tower ground were those of World War I & II spies.

One element remains constant as the Tower has become a tourist destination rather than a place to inspire the kind of fear that made Anne Boleyn collapse and cry out as she was escorted through Traitor's Gate. It is the ravens. According to legend, "If the ravens leave the Tower, the kingdom will fall." In the interest of the empire, the Tower is home to ravens with clipped wings and luxurious lodgings. The Yeomen Warders have little else to guard these days than their black feathered friends. 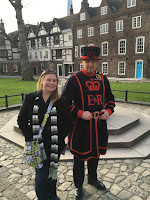 During our visit, the White Tower was home to a special 600th anniversary exhibit for the Battle of Agincourt. A large battle map was set up in the center of one room. As we approached it, my husband said, "So, tell me what is going on here." Ah, to have someone request to be regaled with medieval knowledge! It was great fun, and we enjoyed each of the informative displays that are located throughout the various buildings and towers.

Have you visited the Tower of London? There is so much to see within this single stop! What did you enjoy the most?

Posted by Samantha Wilcoxson at 4:58 PM