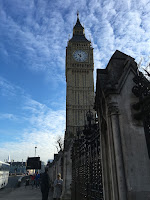 This is the first a planned series on historic locations that I visited during a recent trip. I look forward to sharing each stop with you and hearing about your impressions and experiences of these amazing places.

My trip began with the long flight to London Heathrow. London being too rich and diverse to cover in one post, I've selected the familiar Big Ben to be the first of the historical places we will look at.

Of course, Big Ben isn't really the name of this highly recognized landmark at all. It is more properly known as Elizabeth Tower and is the defining feature of the Palace of Westminster where the British Parliament meets. The large bell named Big Ben has universally become the accepted nick-name for the clock tower in which it is housed. Big Ben, which resonates a rich E-note, deserves its name with a 9 foot diameter and weight of 13.5 tons. 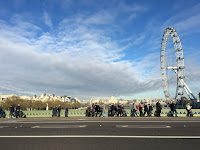 Surrounded by the sprawling city of London, some visitors are likely surprised that the tower is not taller. While it soars by the standards of the mid-19th century, even the limited modernity of London is beginning to dwarf the iconic tower. It's total height is 316 feet, or the equivalent of a 29 story building. One of the great characteristics of London and many other English cities is that new building is restricted in order to coordinate with and not overwhelm the history of the setting. Even with these rules in place, Big Ben is starting to look somewhat overwhelmed. Just across the Thames, the London Eye tops out at 443 feet.

Not to say that the tower is small. The four clocks measure an impressive 23 feet across with hour hands that stretch 9 feet for the time to be clearly visible to anyone with a sight-line to a clock face. The longer minute hands extend 14 feet, and you will climb 340 steps if you wish to reach the belfry. 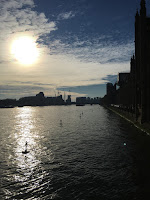 What the London Eye and other modern structures cannot compete with is the detail and beauty of the Palace of Westminster. What it lacks in height it more than makes up for in a view that takes your breath away. The Gothic Revival style that was utilized in the design makes the structure appear even older than it is. It would be easy for one to spend hours strolling around this sprawling palace and noting the details in the stonework that were expertly formed by the best craftsmen of their day. 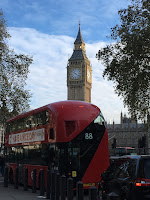 A structure has existed on Westminster's strategic location on the Thames since the 8th century. While Edward the Confessor built the cathedral during the 11th century, the palace has undergone more gradual evolution. The Palace of Westminster as we know it, with Big Ben in the clock tower, was not developed until after a fire in 1834 destroyed the previous structure. That is when the palace that people around the globe recognize as London came into being, with over 1,100 rooms, including the chambers designed for the House of Lords and House of Commons. 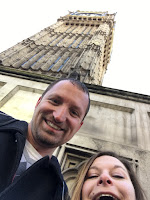 For locals, some of the romanticism of Westminster may be overshadowed by politics, but visitors can simply lose themselves in the rich history and architectural wonder that is not found on the other side of the pond.

It is clear that I was quite happy to reach this symbol of Britishness. You will see as this blog series progresses, my enthusiasm continues through Bath, Liverpool, Edinburgh, York, and many places in between.

Have you visited Big Ben? What were your impressions?

Posted by Samantha Wilcoxson at 1:20 PM