We are going to head out of London for now and return there at the end of our virtual tour. As I did while I was in England, we will travel west toward the storybook city of Bath. That is a stop worth looking forward to! For today, we visit the ancient and mysterious monument known as Stonehenge. 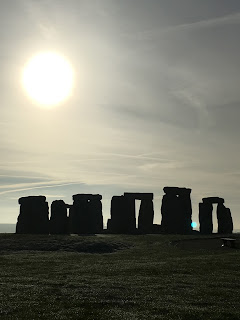 Stonehenge is located in Wiltshire, but all you will see from this English Heritage site is fields and sheep. If you're planning your day right, you will coordinate this stop with a trip into nearby Salisbury to see the breathtaking cathedral. Unfortunately, we were on a guided tour that did not include the Salisbury side-trip, so I will stick to Stonehenge for this post. (If you have visited Salisbury, I would love to hear about it and see pictures in the comments below.)

Visitors to Stonehenge vary from those who are intensely excited about the possibilities that exist in the location's mysterious past to those who wonder why so many people get excited about a circle of large stones. If you love the opportunity to investigate history and determine what really happened centuries ago, you will appreciate the model village, museum, and walking tour of Stonehenge.

Arriving at Stonehenge actually places you at the visitors' center with an additional mile to walk or ride the bus to the monument itself. At the visitors' center, you may stroll through the museum displays, grab a snack at the cafe, or try your strength at pulling a stone into place in the model Neolithic village. The museum is rather small and contains artifacts that fit nicely into the various theories that you will hear about on the audio tour. My favorite part of this building was the 'Wish You Were Here' exhibit. This is a circle shaped room with images projected on the walls to place visitors at the center of the Stone Circle throughout the ages. Witness Stonehenge being built, used, and weathered by time in the course of a few moments. 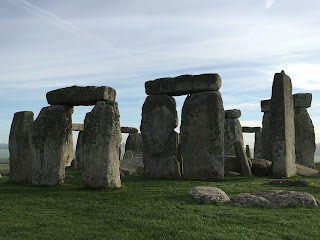 When you make your way out to the Stone Circle, an audio tour points out a variety of facts, theories, and views that you'll want to take advantage of. Stonehenge was built approximately 5000 years ago using simple tools to bring stones weighing up to 30 tons into place from distances believed to reach into Wales. Why go through this much work? Well, that's where it becomes a bit of a treasure hunt.

My husband theorized during our visit that the entire area was simply half built at the commands of a petulant prince who got bored before it was complete. The audio tour and museum offer more sophisticated explanations.  ;-)

There was originally more to the Stone Circle than we currently see, as several displays will show you. It is known that the area was used as a cemetery for centuries, but the extent of religious ceremonies that may have taken place is less certain. 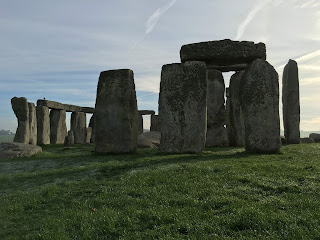 The stones have been shaped to be more finished and aesthetically pleasing from the north-east, giving the circle a definite 'front' and 'back.' While some stones are carefully smoothed and shaped, others are left unfinished for unknown reasons.

Uses for the Stone Circle likely evolved over time, possibly being used as a seasonal clock, gathering place, and religious center. There is no question that the enormous stones were carefully placed to align with the movement of the sun through annual solar events. But why? Was it used to predict and track seasons or was this simply a pleasing design for a king's coronation? These are questions that the enthusiasts of Stonehenge continue to discuss and investigate. 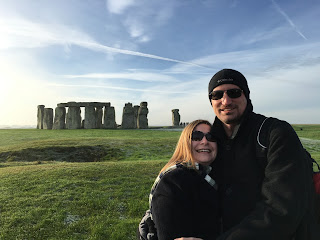 A surprising amount of the Stonehenge area has not been excavated by archaeologists, so possibilities of new discoveries are very real. Ongoing research will continue to answer the questions that people have been asking for hundreds of years about Stonehenge, but with each new discovery more questions arise. Will we ever know the complete history of Stonehenge? Probably not, but that's the fun of it, isn't it?


For more information on Stonehenge, visit the UK's English Heritage website.
Posted by Samantha Wilcoxson at 9:31 AM